Life is a beach!

Well, to be honest, I am not a beach person. I really do like the sand and do not get in the water at all. My family is much more likely to take a winter vacation than a summer one.

But I do like beach books. I read one of these recently and then realized I had another in my next-read stack that also had the word ‘beach’ in the title. Then I started looking and quickly found a long list of books that feature that word.

So, I thought, why not! A beach themed month of books! Enjoy! 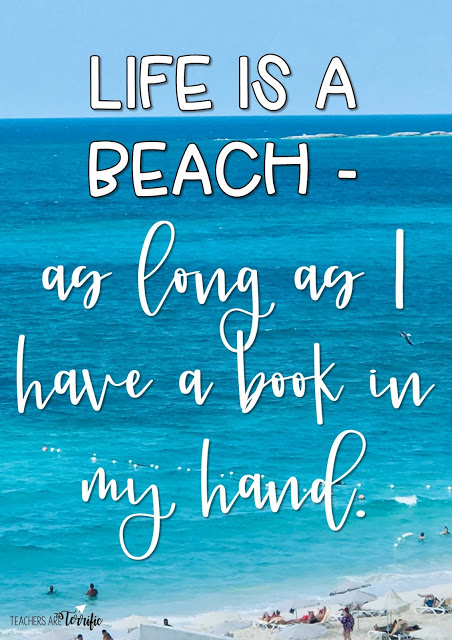 In this post, for your convenience, you may find Amazon Affiliate links to resources. This means that with your purchase of items Amazon will pass on small percentages to me. This will not create extra costs for you at all! It will help me keep this blog running!

Life’s A  Beach by Claire Cook

This seems like the perfect place to start with beach-themed books!

In the meantime, her mother wants to sell the family home which means Ginger will have to move. Her father makes daily treks to a local dump and hauls home relics and treasures he finds. He hides them in her apartment- because mom is determined to clean out their house and sell it. And, Noah, seems reluctant to any type of commitment.

Can it get worse? Yes, there is also Ginger’s sister, Geri. Geri is about to turn 50 and spends all her time bemoaning this fact. Ginger is Geri’s default babysitter and one day Geri asks her to take Riley to an audition for a movie that will be filming locally. Ginger takes the 8-year old and he is hired as an extra. This means Ginger will now be on the movie set every day. And, there just happens to be a charming gaffer on the set that she seems interested in.

Now, before you think this is a typical chick book I must tell you this one is ‘laugh out loud’ funny. Ginger’s conversations with everyone are sprinkled with wit and situations that you will love. This is a light-hearted book that is just right for a lazy afternoon or the beach. 4 stars!

From the light-hearted Life’s a Beach to this one and it was a little heavier, although it’s still a great beach read and somewhat a chick book.

Cara, a 40-year-old woman living in Chicago, is asked by her mother to return to her coastal home. She does this grudgingly, partly because she always felt her mother spent more time dealing with the rescue of loggerhead turtles on the beach than she spent being a mom. But also Cara has just lost her job in Chicago.

Once Cara arrives she discovers many things. The beach home has fallen into disrepair and she begins to tackle the renovations with the help of a local man named Brett. She also finds a pregnant teenage girl is living with her mother. (There is a logical reason for this.)  Cara’s brother Palmer is part of the story (and his family) and some of her mother’s friends. And her mother is still spending a lot of time with turtle rescues and nurturing.

Cara also finds that her mother is seriously ill.

There are many backstories in this book as all the characters are woven together. It is well written, although a little slow at times. It’s also lengthy. Chapters begin with little snippets about the turtles and I enjoyed learning about them. The book is a study of the relationships between mothers and daughters and was a sweet reminder that life is all about family. 4 stars for this one!

It is 1917 when Virginia Fortescue finds herself driving an ambulance across France to rescue soldiers. She has traveled from the US with the Red Cross to volunteer to drive. Her past includes the murder of her mother when she was 8 and then her father’s trial that has sent him to prison.

Now, in France, Virginia meets the charming Simon Fitzwilliam, who is an Army surgeon. She falls for him and they begin a love affair. It is only through the camp gossip that Virginia discovers the captain is married and has a child. In the meantime, Virginia meets Samuel, Simon’s brother, that was supposed to be dead (according to Simon). Samuel tells Virginia a different version of his family’s story. Who should she believe?

Now, let’s go forward a few years. Virginia is back in the US and has a two-year-old daughter (with Simon). They are living in New York and Simon is not with them. She hears from a lawyer that she is inheriting the estate of her husband (Simon) and she takes off to Florida to find out what has happened. (By the way- This is a not a spoiler for you- the back blurb on the book cover tells you that she marries Simon.)

In Florida, she discovers the beautiful beaches, a different lifestyle, and the business the family is in. She spends time with Simon’s sister, Clara, and his brother, Samuel. Again, Samuel tells her a version of the family events and things Simon has told her that are different than she thought. Again, who should she believe?

Also, woven throughout this book are letters that Simon wrote to Virginia. In each letter, he told her some family history and what he was doing and also professed his undying love for her. Virginia never read the letters and this will end up being a big part of the story.

This book meanders along with the family and how Virginia will deal with the inheritance of the business and Florida properties and then BAM you are hit with a twist that I certainly did not see coming. It made me really think back to all of the conversations and descriptions from the first half of the book. So, read carefully!

If you have read other books by this author you know her writing style is effusive and so full of descriptions. It can be quite delightful and it can grow tiresome. I still enjoyed this book. It was the perfect beach read, without being overly formulaic. 4 stars! (I did not like the ending!) Actually, I did not understand the ending.

The Beach Club by Elin Hilderbrand

Just imagine that you work on Nantucket. You manage the beach hotel and beach club. Very wealthy customers start coming in the summer and the place stays crowded. You work with the hotel owners and live with your girlfriend of 6 years. You stay very busy with this job and love working with all the patrons. Sounds idyllic, doesn’t it?

This is the background of this little book by one of my favorite authors. Here’s the story: Mack works on Nantucket through the summers and has for 12 years. He left his family’s farm in Iowa after the death of both parents. His girlfriend, Maribel, is the local librarian and desperately wants to marry Mack. The hotel owners are Bill and Therese, a couple that is madly in love. Their daughter Cecily is graduating from a private off-island school and they expect her to take over the hotel when they retire.

Also, working at the hotel and beach club is Vance. Twelve years before the book opens Vance was on his way to manage the hotel for Bill. Mack beat him to the job accidentally. A new employee is named Love. She is on the island for a summer job and plans to have a fling and become pregnant while she is there.(I know, it’s a little improbable, right?) Jem arrives to work for the summer. He’s a 25-ish year old just trying to make money. Is this getting complicated enough for you?

Throw a few more wacky hotel guests into this and the likely complications of running a hotel and you have quite an ongoing story. There are some problems that come up quickly. Mack must decide if he will marry Maribel. Jem finds himself falling in love with Maribel. Love wants to get involved with anyone. Mack must also decide what to do with the farm back in Iowa. Cecily does not want to live on Nantucket and take over the hotel from her parents.

So, what did I think? This book was entertaining. I did like the characters and stuck with the book to see what happened to all of them. There were a few surprises. But…there were also some very silly things happening that just seemed out of character for the characters- ha! In all fairness, this was the author’s first novel, so I would say the plot holes and storyline problems were due to that. I would give it 3.5 stars. It is an easy read and would be a perfect book to read while lying on a beach chair!

This one was my favorite of the beach books! It is a little bit of a chick lit book, but with a detective-style mystery added in.

After her mom’s funeral, 36-year-old  Drue, is given the keys to her grandparent’s cottage on Sunset Beach. Her dad, whom she has not been in contact with for years, shows up for mom’s funeral. Mom has left the cottage to Drue and now dad is offering her a job. He owns a law firm that specializes in injury cases.

Drue decides to move to Sunset Beach and take the job. She spends time renovating the cottage and trying to get used to the new job and her immediate boss. The boss just happens to be her dad’s 3rd wife and a girl that had been friends with Drue when they were school age. Wendy is a real thorn in Drue’s side and so is the job. Drue’s job is to answer the hotline phone for the law firm and make decisions about which cases the firm can take.

Enter Alihah and her grandmother, Yvonne. Yvonne’s daughter, Jazmin, was found dead at the hotel she worked for and the law firm pursued a wrongful death case with the hotel. The settlement that was awarded was a small sum. Drue meets Yvonne and decides to investigate the case again, hoping to get more money for the grandmother and the small child.

In the meantime, Drue finds boxes in the attic of the cottage and discovers a police case file about a woman that went missing 40 years prior. The disappearance of Colleen was never solved and she was never seen again. Drue also looks into that case.

Now, don’t worry, there are some chick lit moments. Drue does have something going with her workmates, especially Jonah, and she also meets Corey, who lives nearby and helps her with physical therapy from a knee injury.

This was a fun read. I loved the investigation/mystery part and it had just enough fluff to make it entertaining. 4.5 stars! If you read any of these beach books – I would start with this one!

Alright Book Fans, I loved this beach book theme! Wait until you see next month’s themed books. Hint: It has something to do with the number ‘one’!