Top
Looking for FREE Resources?
Click Here!
This amazing challenge was inspired by a real-life event! My husband and I were vacationing in South Carolina and drove out to visit an island. As we started across a bridge we were suddenly stopped and then watched as the bridge swung open.
It was a drawbridge! Instead of opening in the center it had a span than hinged open like a doorway. So fascinating to watch…
And it made me start thinking of what I could do in the STEM Lab, of course! We have completed so many challenges and it is quite common to hear us cheer when something works. This challenge produced the most excited cheers ever!

How can we build a drawbridge?

We really experimented with this one! First of all, I had many students that had never seen a drawbridge work. So, I found videos of many different kinds of bridges.  We also tried different materials and changed the rules of the task when we needed to and here is what we ended up with as far as a plan:

The Span for the Bridge

We have gigantic lab tables that are about 3 feet high. Whenever we build a bridge I just push the tables together (the tables have wheels) and measure the opening. The space we used was about a foot wide. (Two student desks will also work.) 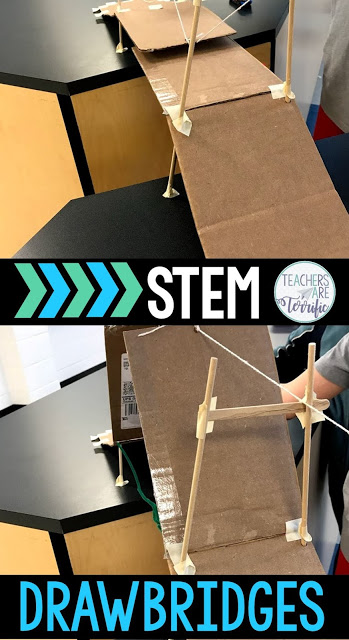 The two bridges above used a wide piece of cardboard for the roadway and dowel sticks for the end supports. Most of the teams used a piece of string as a way to pull open the bridge parts. Many groups attached the string to a wind-up system they also built.

TIP: Dowel sticks are a great material to keep stocked for STEM. I have a nice supply in several diameters. I have sets that I have also snapped in half and my rule is that students may not break the sticks. It’s a safety issue and dowel sticks are costly!

Which Way Will Your Bridge Move?

Students were really intrigued with the drawbridges we viewed that did not open in the traditional up/down style. They really wanted to make the side to side version. 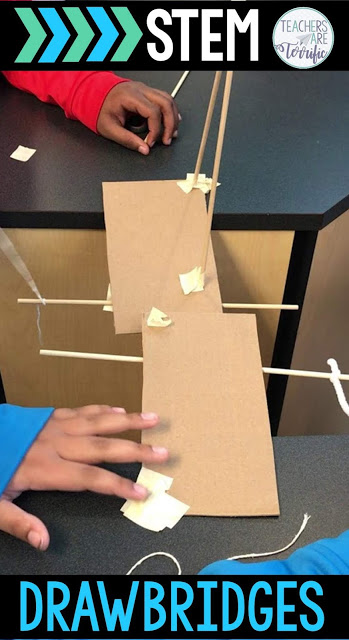 If you look closely at the above photo you can see string or pipe cleaners attached to the rods under the bridge. When those are pulled the roadway hinges toward the tables and leaves an opening. This model opened really well, but getting it to close was more difficult. What a great problem they had to solve!
TIP: Kids will try to add parts to structures that cannot happen in real life. In the photo above one of the students is standing off to the side pulling the string that opens his side of the bridge. Could a giant person really be standing in that position to make a bridge work? No!
When I see things like this happening I will say, “Great problem-solving and I will be back in a minute to see how you fine-tuned this design to make it real.” This is a quiet way to signal to the group that their design needs more work. Here’s the thing- sometimes kids need to try something that is not really possible in order to re-design and make it work!

The Bridge Has to Have Supports

In order for the drawbridge to open and close it had to have a good support system on each side. The supports had to allow for movement and had to keep the sides of the bridge in place. 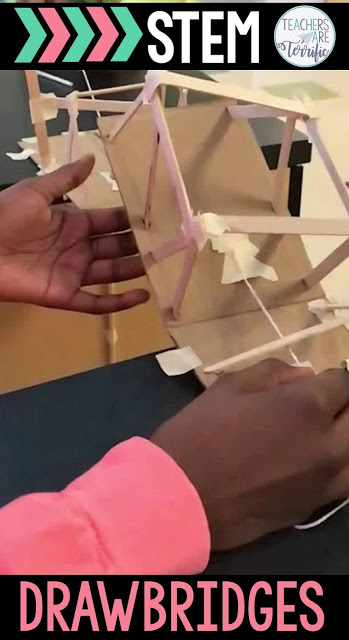 Above you can see a team that really wanted their bridge to also look like a bridge. They added a lot of side rails and then tackled the opening and closing. It did not occur to them that the side rails would add weight to their bridge and the opening and closing would be affected.
TIP: You might notice in the photo above that the team pushed craft sticks through the cardboard to make those side rails. I have a safety rule in my lab about piercing anything! This team marked all the spots on the cardboard that needed a hole and brought those pieces to me. I used a box-cutter and easily make the slits they needed.

Let’s Watch One in Action!


Wasn’t that fabulous! You probably noticed that we used pencils instead of dowel sticks! This challenge was created about two years ago and that particular year I had hundreds of brand new pencils (unsharpened) and we built things with them!

More Ways to Open and Close

Below: This team creased the cardboard to be the hinging part of the opening. This actually worked well. They pulled the strings from the end supports and then released them to close their roadway. 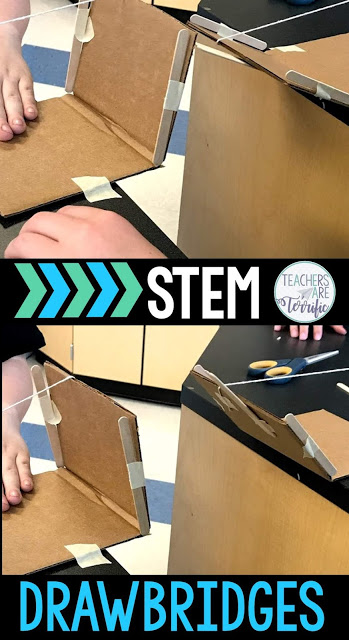 Below: The string that makes this bridge open runs under the roadway. What you cannot see is the crank at the top of the center that is being wound to pull the strings. 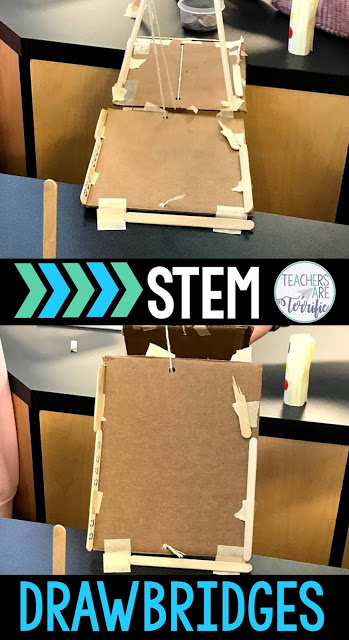 So much fun! (And Cheering!)

I will tell you this one was the best for sharing at the end of class. Every team was so proud of the opening and closing mechanisms and all the extras added to the bridges. Many of them had guard rails to stop traffic or a red light/green light to stop cars. The kids loved showing the guard rails falling into place and then opening the bridge!
Whether you use pencils or dowel sticks this challenge is perfect for your 4th or 5th graders! And, trust me, whenever a bridge successfully opens and closes they will all cheer! 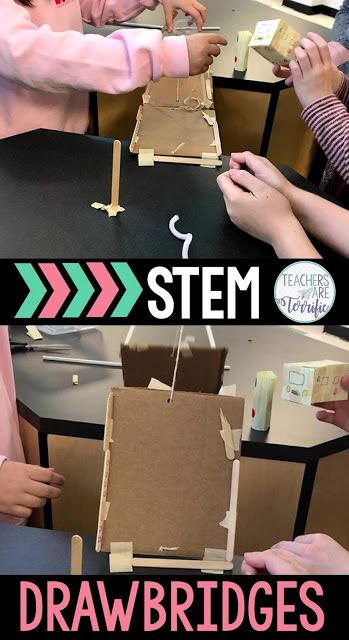