Top
Looking for FREE Resources?
Click Here!
This is truly the best part of STEM for me! It’s watching kids “figure things out”. Problem-solve, rethink, and do it again.
Let’s face it! Solving problems is what STEM is all about. Everything the students do leads to solving a problem and then another and then another.
But, it’s beautiful to watch.
And, always, always, their solutions are way different than my thinking. I say these words often, “Oh, my goodness, I would have never thought of that!”

So, How Did We Get Here?

Simple answer. The students have a building design to tackle. They research, watch a video, do some reading, and discover new thinking about the structure. This can also be from just talking about the task with each other and the whole group.

Then they find out what their building materials are and they start thinking about how to build the structure using those supplies. They talk, they sketch ideas, they share ideas, and then they choose what to do. Everyone takes on a job in the group.

Time to build! And here is where the major stuff begins. Their ideas don’t work at all, the idea is scrapped and they start again, the second idea doesn’t work. Then what?

I could describe problem-solving steps to you endlessly, but I thought it would be easier to show you. So, the photos I have included all have clever little things I have seen students do to make a structure or device work.

The task is to build a rolling car that will be propelled by the wind (a fan.) 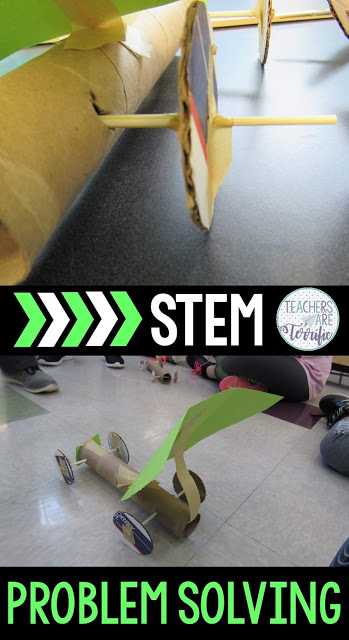 The absolute hardest part of this task is making the wheels roll.  Kids try so many things! The typical thing I see is they attach the axle to the car and the wheels roll on the ends of the axle. The axle doesn’t move. This can work, but it usually does not. The wheels won’t stand up straight and come off easily.
Now take a look at the photo above. This team inserted a wooden axle through a straw. The straw is attached to the car. The wheels are attached to the ends of the wooden axle and secured with tape. They roll perfectly!
Secret Thing I Have Seen: As soon as one group solves the problem of the car’s axle in this way, suddenly the other groups will start modifying their car with the same axle and straw device. #win-win

The task in this challenge is to make a turning crank, with a handle, that will safely wind up a bucket. The bucket is rescuing a fallen person. We use a Lego man. 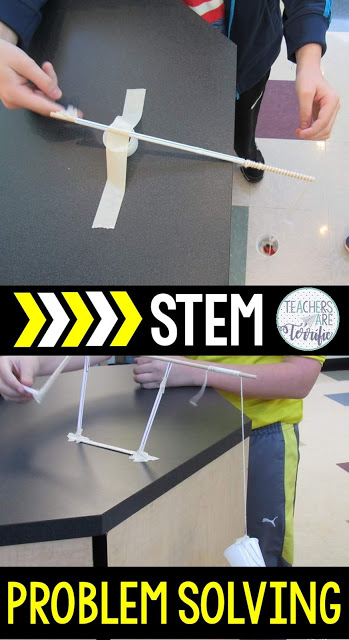 In the top photo, the team has a straw laying atop a plastic disc. The sticky part that should be touching the straw is covered with a piece of paper. (Sorry, you cannot see that.) The straw is held in place because the tape is tight, but it can still turn as the handle is moved. Their handle is a straw piece attached to the end of the long straw.
In the bottom photo, the team used a dowel stick and attached it to the straw legs. A craft stick handle with a straw on the end makes it turn. Check below for how they attached the dowel stick to the straw legs! 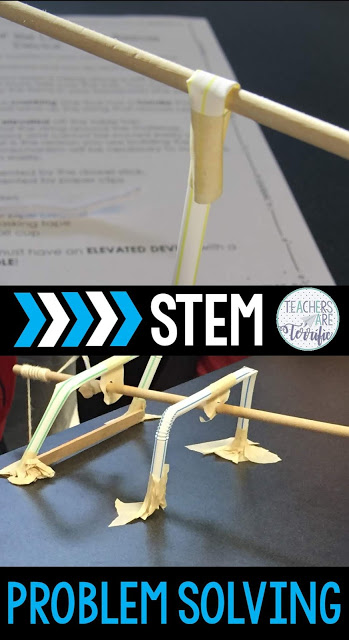 The top photo in this image is from the Rescue Device pictured above. It’s a close-up of how the team attached the straw and dowel stick. Really clever! They had to revise that many times to find the perfect size that would let the dowel stick turn.
The bottom photo above is another device built for the same challenge. This team made the two U-shaped legs and then placed masking tape over the middle of each. The masking tape ends were stuck together and hanging. They used a hole puncher to make holes through the folded over tape and threaded the dowel stick through it! So neat!
Here’s one more from that same challenge! 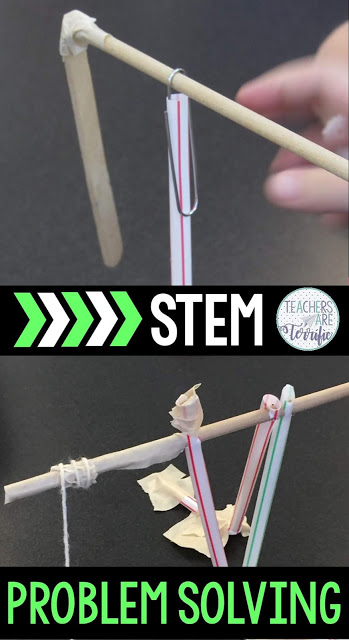 In the top photo above the team poked a paper clip inside the straw and let the top of it stick out enough to thread the dowel stick through. The craft stick on the end is their crank handle.

In the bottom photo, a team used a hole puncher to make holes in the straws and then threaded the dowel stick through those holes.

Secret Thing About This One: The crank being able to turn is very similar to a car axle. When a class has already made cars, they do very well with this challenge because they remember what worked with axles. Isn’t it neat that kids learn strategies and use them again!

The task with Windmills is to build the windmill structure itself and add a turning blade to it. We use a fan to make it turn. 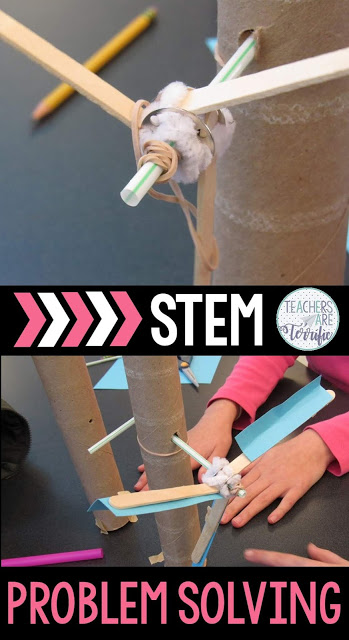 There are SO MANY problems to solve with this challenge. Building the actual structure is simple. The first problem comes with attaching the turning mechanism. Most teams do this like the top photo above. They make holes in the structure and thread a straw through until it protrudes enough to hold the blade device.

The next problem is what to use as the center of the turning device. I offer many round objects and the team in the photo used a sewing machine bobbin. This created a big problem for them! Attaching the blades to a very small object is hard. They wound pipe cleaners through the holes of the bobbin and tightened them to hold those craft sticks in place. Really. #kidsaregreat

And, of course, if the blades don’t turn when the fan starts blowing, the kids have to rethink and solve that dilemma. Those skinny craft stick blades above would not turn, so the team added some paper. They had to work with that paper a lot! The flat paper blades did not “catch” air, so they bent the sides and this finally worked.

Secret Thing About This One: It’s really all about that center of the blades. When kids determine that those smaller centers are just too difficult to attach things to, they will trade in their center objects for something larger.

I Have So Many More Examples…

that I could share with you, but I think you can see from just this selection that kids are amazing. They think of ways to make things work that make me shake my head. Watching kids solve dilemmas is the number one reason I love STEM!

This post is Part 5 of my Summer Series! Try them all! 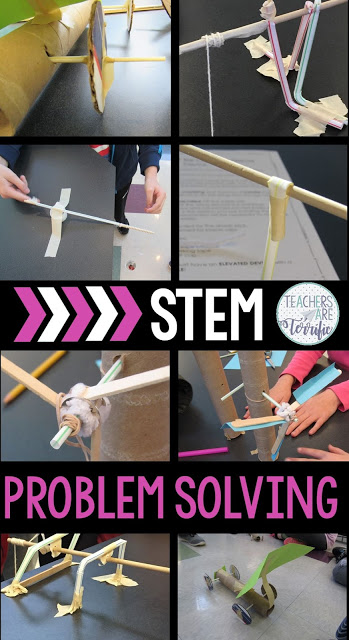