Top
Looking for Summer Resources?
Click Here!
A few months back I experimented with a STEM Challenge we called a Quest.
Whoa! I could not have found a more perfect way to add a design challenge together with some intense problem-solving. It’s a race against the clock and other teams to open locked boxes after completing a task.
My fourth and fifth graders cannot get enough of these! I wish I could invent them more quickly! The latest one is about the Weather.

Do you know the difference between an anemometer and a barometer? What about a hygrometer?
If you don’t know then this Quest is for you! 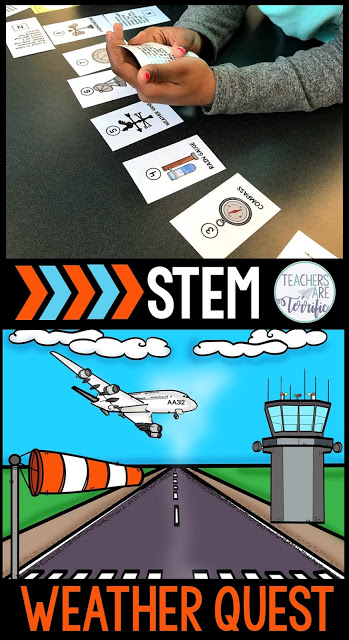 In the first task student match images of weather tools to short descriptions of them. I wrote the descriptions as if a meteorologist is saying them on-air. And I included a Weather Tools Dictionary to help kids with the matching.
After matching all the images the kids find a word spelled out and this leads them to a poster. I actually made two posters that could be the right one. They had to really think about the clue and find the exact poster and the lock code is on it!
Unlock that box and grab the bag for the next task!

Let’s Do Some Math!

The second task has math problems! Each math problem has an alphabet letter and by answering the problem and writing the letter on a blank the kids will find the answer to a weather riddle. That leads them to another set of posters and the lock code. 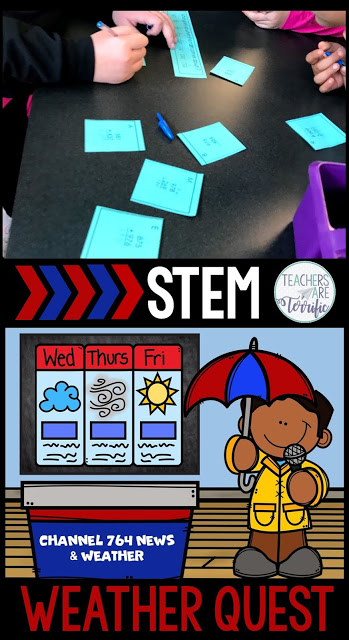 One thing I have discovered is that you need to cut the math problems apart. I create these on a page so that every problem is in its own box. Just cut the boxes out and then kids can each work on a problem at the same time. Everyone stays engaged!
The two posters are both showing something about rainy weather and when that second box is unlocked the group grabs a bag of idioms.
Yes, idioms!

Do you know how many weather-related idioms there are?
That’s only a few, but there are so many. 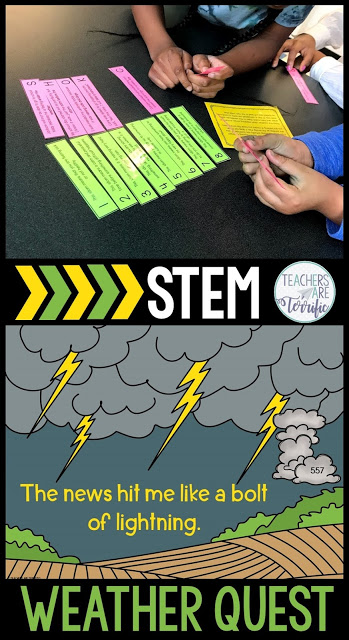 In this task, the students are matching a weather idiom to a sentence in which it used correctly. The correct order of the idioms will spell a word which leads to two posters and eventually the last lock code!

When that last box is unlocked my students found a constraints card describing the rules of the STEM Challenge. They build an anemometer!
TRUTH: I thought this would be too easy. 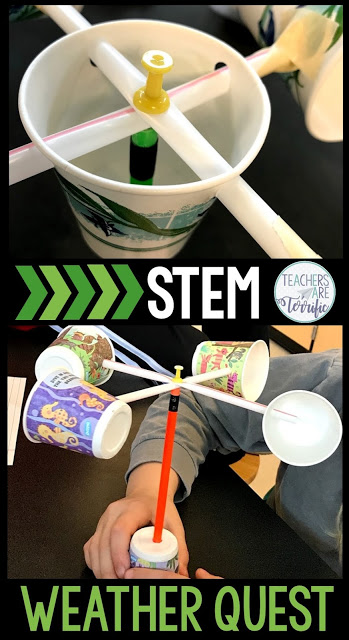 It was not! It turned out to be really challenging- even though almost all the models we built looked pretty much the same. It was still challenging to assemble and make the device turn. We did discover just how great these worked when we went outside.
They worked so well! Inside the classroom, we found that blowing them made them turn faster than my fan blowing on them. Outside the kids found that standing closer to the building made them turn faster. They decided the wind was “bouncing” off the brick wall!
One of the things the kids were supposed to do is count the RPM’s of their devices. This turned out to be hard since they turned so fast!
If you are looking for an exciting way to work on some weather topics and build a quick weather tool this Quest will be perfect!

This resource is available in two ways: