Top
Looking for FREE Resources?
Click Here!
So, are you one of those classroom teachers that will have kids make a Valentine’s Day box for their party goodies? I will admit I was one of those…. until a parent sweetly let me know how much she hated it.
It was ultimately a contest to see which students would have the most creative box and, boy, there were some cute ones. And there were some recycled ones! I had a different parent tell me she saved boxes from one year to the next and just touched them up a bit and the kids had a box.
So, what is my point? Have you ever thought about doing a STEM Challenge instead? What if you had moms send in some Valentine candy and decorative items to complete these projects? I think the moms would be sooooo happy!

We have three projects we repeat every year early in February and these are always a hit!

There’s a story behind this one! My third graders were very interested in the zip lines that the fifth graders were working on earlier in the year. Some of them asked if they would get to make these.
Well, no. I have some challenges that are grade specific – like fourth grade completes Roller Coasters, third graders design Boats, and fifth grade does the Zip Line Challenge
But, then I started thinking….. 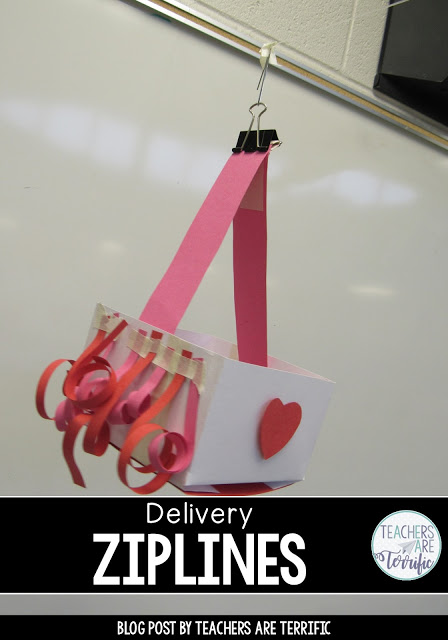 What if I simplified the zip line challenge and added something seasonal to it? Can you just hear my third graders squealing with excitement when they saw this on our agenda? 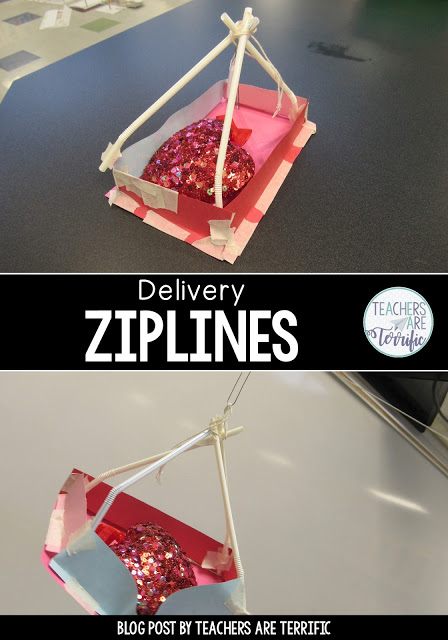 They had to build the carrier to hold a gift for their mom for Valentine’s Day. They also had to design a way to add it to the zip line and keep the present safe. They loved this! 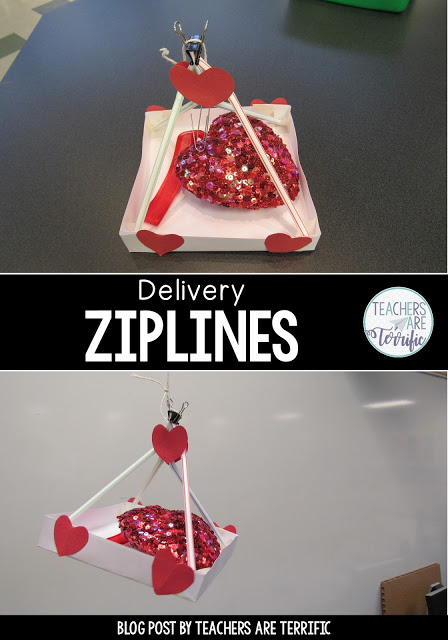 The giant heart came from the Dollar Tree and was very lightweight. I think they also loved decorating the carrier with paper hearts!

This challenge originally was one we completed at Christmas time, but I knew it would work for Valentine’s Day, too. I just needed some candy! 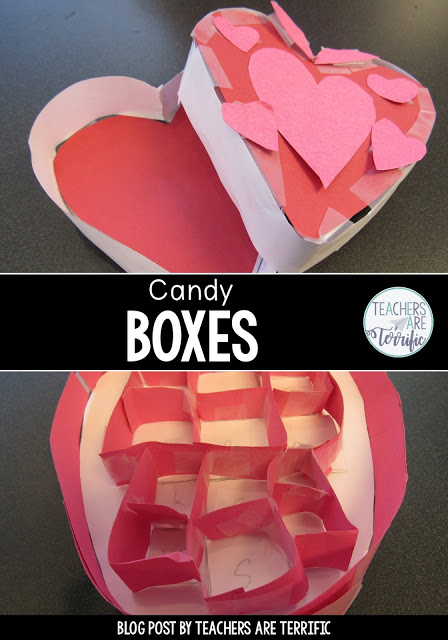 Kids had to build a box that would perfectly hold the Valentine candy. Think about it! When you open a box of candy the candy fits in little slots… 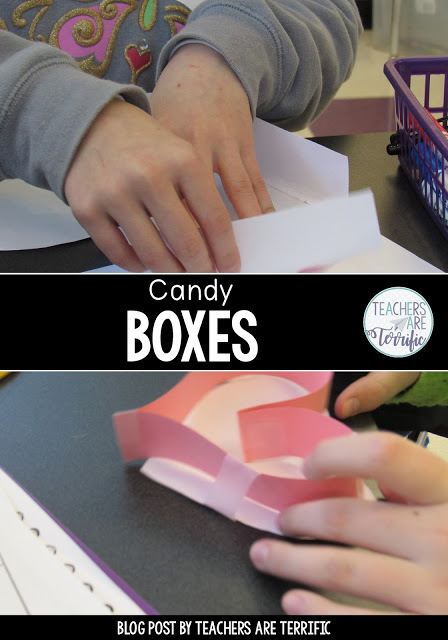 What a fabulous team member you are if you know how to make a box! However, I threw a twist into this challenge and added a rule that the box had to be heart shaped! Total fun. We even had a team that made a box that had a pull cord that made it pop open! Kids are great!

This one has some amusing parts! Not!

The test class with this one helped me add about 7000 safety rules. We started with toothpicks and, of course, they made arrows out of those. Which didn’t work because it was way too dangerous. So, then I went with cotton swabs! 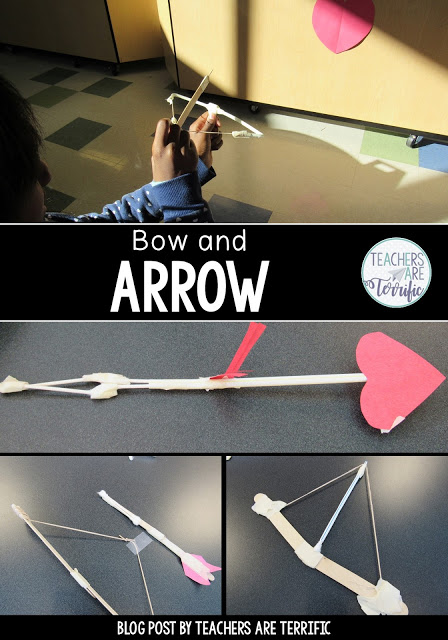 We also added rules about the targets! Eventually, I moved the targets to a wall and placed a piece of tape on the floor as the firing line. The BIG rule was that kids could not fire an arrow unless I was watching. 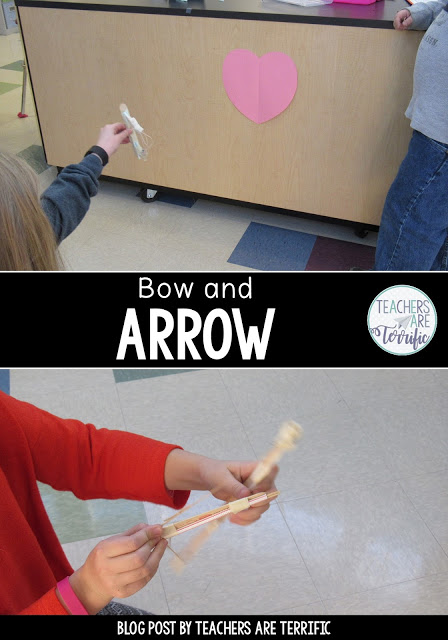 This turned out to be more challenging than I expected. The arrow was the easy part. It was making a bow that was strong enough to pull back and launch those little arrows. We had some great contests and actually hit the targets a few times.
Well, I hope I have given you some ideas for adding STEM to Valentine’s Day in lieu of those decorated party boxes. Total fun and kids will remember it. (And, their moms will thank you!)
And, one more thing! I have been adding Math to our STEM Class! Take a look at the sets we just invented for Valentine’s Day! I had to make it science-based (cause that is just how my brain works) so every page has a chocolate-related set of facts! Total fun! All three sets feature Fractions ( Fractions in February is how I remember when I teach certain topics!)
Valentine’s Day Resources are available in two ways: 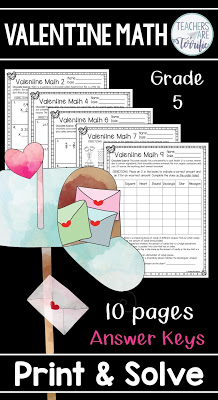 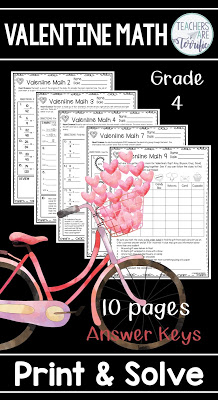 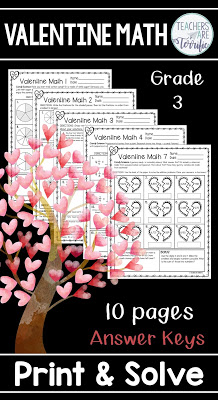