Top
Looking for FREE Resources?
Click Here!
When I was a little girl my family lived in Germany. Snow was a constant in our winter lives. We walked to the bus stop in the snow, had all the snow gear, built giant snowmen and snow forts, and played in the snow all winter. It never melted!
The absolute best memories I have of the wintertime in Germany was a place we called Sled Hill!
We went to Sled Hill every day dragging those wooden sleds behind us. Just imagine dozens and dozens of kids standing at the top of the hill and taking turns going down the steepest parts, crashing in mid-run, or flying down the grooved paths screaming with the excitement of the ride. Is there anything better?
Now, I live in Alabama and it rarely snows. When we do get a dusting or the occasional BIG snow it is such fun for our kids. I love telling my students about living in a place that had tons of snow and these challenges were invented just for my southern kids!

Here is something I have done a few times as a classroom teacher. We glance out the window and see snowflakes falling and I start hollering, “Get your jackets!” While the kids are scrambling into their coats I grab black construction paper and hand lenses and we troop outdoors.
The kids catch snowflakes on the black paper and we examine them close up. So much fun!
In the STEM Lab, we decided to use some wacky materials and design a snowflake. 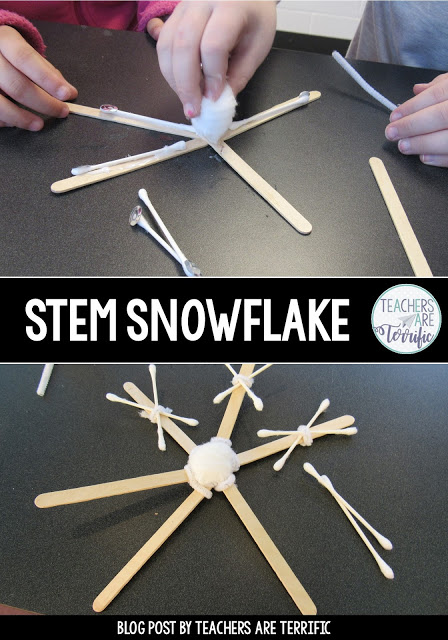 Now, I knew when this was beginning that if we didn’t have some rules that we would get very creative snowflakes. But, I wanted this to be based on Science.
So, I found some websites that showed close-ups of snowflakes and we also read about how they are created. With some background knowledge, we set out to create some fairly realistic snowflakes! 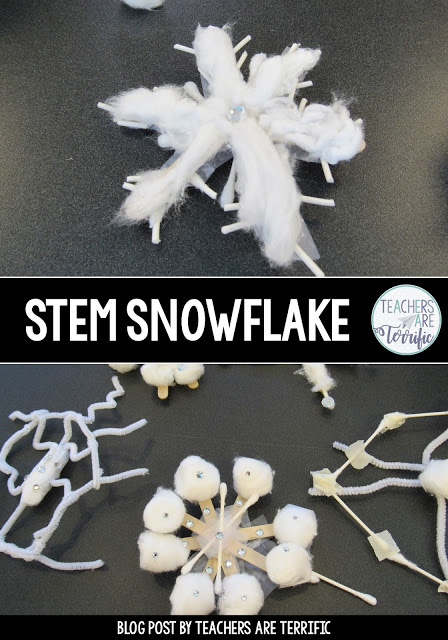 The sparkly parts came from the Dollar Tree- which is my favorite place to purchase holiday goodies for STEM class. Even those fuzzy snowflakes look pretty good!

Have you ever built a snowman? What I remember from childhood is that we would make a ball of snow and then roll it around and around until it was very large. Whatever spot we stopped at would be where the snowman would stand because you could not pick up that huge ball of snow.
Our kids in Alabama try to do the same thing, but with different results. Our snow is not always the packable kind and the snowmen are a little misshapen. But, it’s still fun to see all the results in the front yards of our neighbors.
In STEM class I gave the kids two materials. They had to create a snowman and then decorate it. I imagined they would create a traditional snowman model, but they were very creative in how they designed those little snowmen. 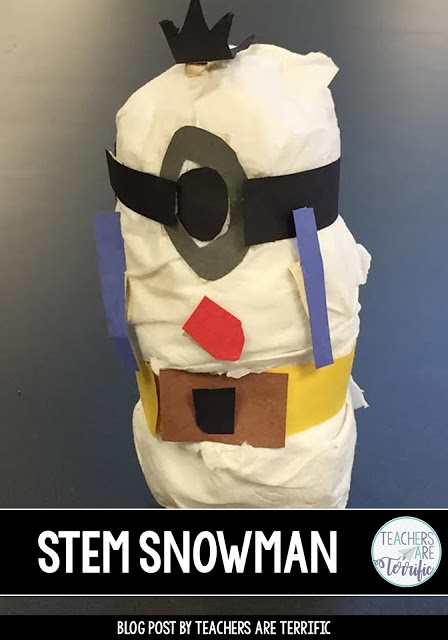 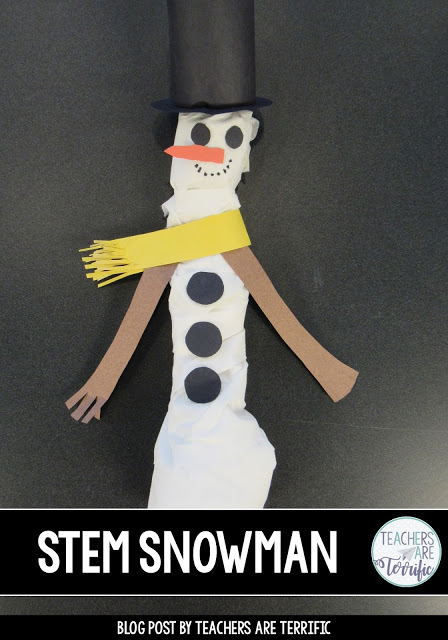 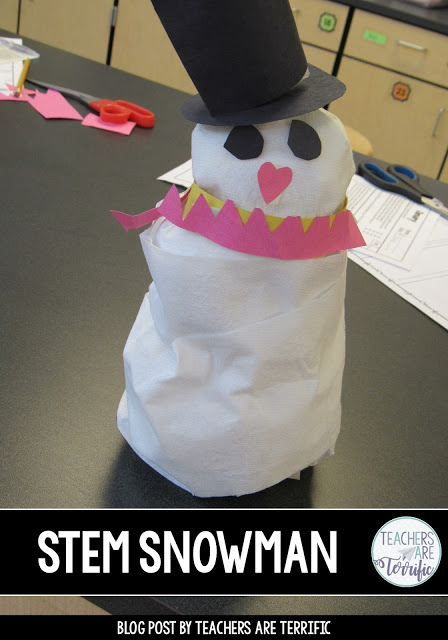 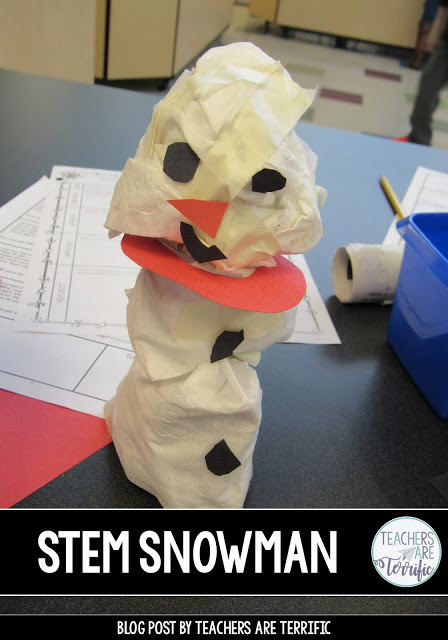 Aren’t they fun! I think the one directly above resembles a mummy!

As a little girl, we never built an igloo! We built plenty of snow forts. We made balls of snow and carried them to the fort and turned them into bricks by smoothing them into rectangular shapes. Then we stacked the bricks. Those forts stayed up all winter and only melted when springtime finally came.
In the STEM lab, we talked about snow forts and then igloos and read a little about how an igloo is used and who uses them. Kids were really intrigued with how fishermen build an igloo to stay protected from the cold while they are ice fishing. They were also really fascinated by how on earth you keep the roof up.
We used a paper plate base and a lot of white glue for this one. 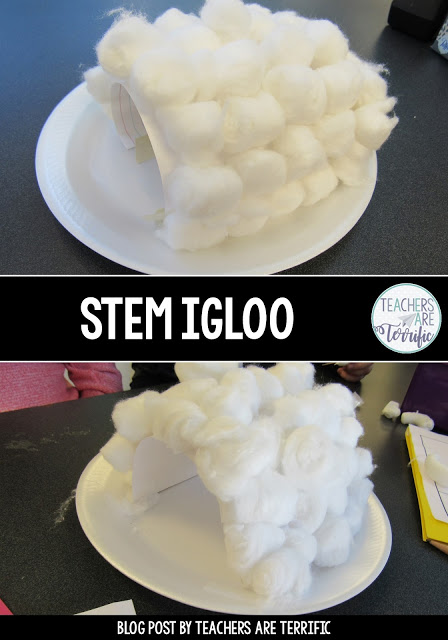 We tried different materials for the “snow” and finally also added index cards to the design. The card was used to make those domed roofs and then materials attached to them to finish the igloo. 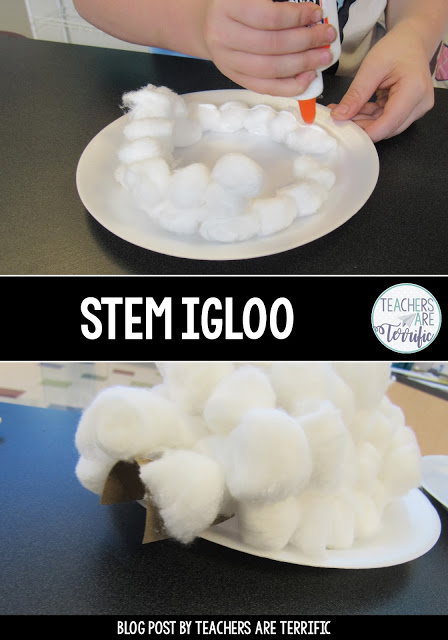 The STEM Lab kids loved creating all these snow-related items. But, to be honest here is what I think they loved more. They enjoyed hearing about me being a little girl and playing in the snow and sledding and throwing snowballs. Kids love it when you tell them about yourself. (They really loved the story of what happens when you try to lick snow off a pole and how you get your tongue unstuck.)
Have fun with your kids this winter- whether it is through story-telling or STEM Challenges!