Top
Looking for FREE Resources?
Click Here!
Oh. My.
This challenge is the best event ever. Seriously.
There’s a background story first and then I will explain what on earth we did.
It’s basically a tower building challenge. Now, mind you, we have built towers out of just about everything and for different purposes and kids do love them. So, how is this one different? Keep reading for this amazing look at our Rotation Towers! 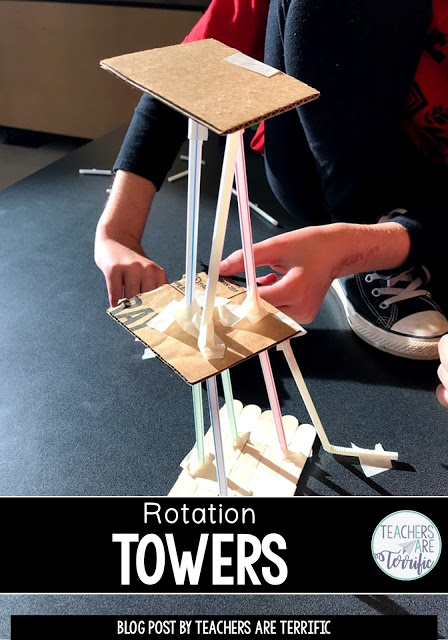 A couple of years ago I was having problems getting my students to take their ideas and planning seriously. When I asked them to sketch an idea they either did not complete a sketch or the one they drew could not be used. I wanted the drawings detailed and labeled and useful.
So, I decided to try something to get their attention.
When all the teams were gathered I asked each team to talk about an idea for the project and then sketch ONE plan. They were to label the drawing with the materials and anything else that might be needed. After about 5 minutes I took up all the papers. I got some very puzzled looks and then the groaning started…because…
I went around to each table and passed the papers out randomly. Every team received a drawing of an idea that was sketched by a different team – with the instructions to use the drawing to build the structure.
It took about 30 seconds for the astonishment to spill forth. This is what I heard the most,

“We cannot even understand what this is or tell what we are supposed to use for building the structure!”

“Exactly,” I said. “And, this is why it is important to follow directions, draw details, and label your work!”

So, how did Rotation Towers get into this story?

I decided to try something to get the kids’ attention again. What if every team starts building something. Then after a few minutes, every team moves to a different table. At the new table, the team must take over the structure that has been started by another team and continue building. 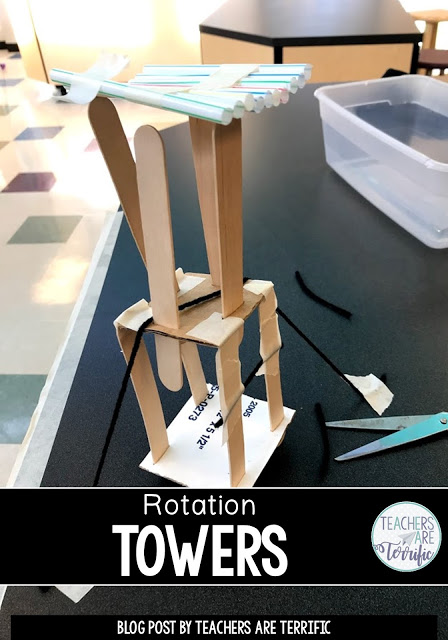 The Tower had constraints to follow- six of them in fact. Every table started with a bin of materials and a set of task cards.
Teams talked quickly and had 4 minutes to complete task 1.
Then they all rotated! At the second table, they examined the structure they found and completed task 2. 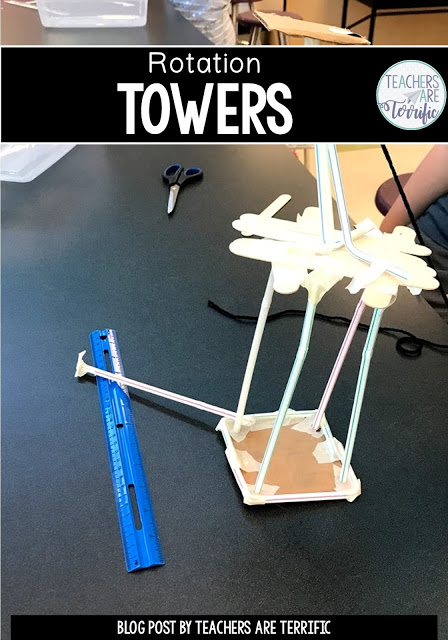 After 4 minutes… well, you get it. They kept rotating until all 6 tasks were completed and this created those towers in the pictures above. Each tower was built by every group. Wow!

Did we run into problems?

Goodness, yes! And that is the exact reason this turned out to be the best challenge ever!
Every team had to be diligent in how the materials were used. Let’s say the first team on task 1 used all the tape. How could the rest of the tasks be completed as new groups moved to that table?
What if the cardboard pieces (that were needed to build platforms) were used at a different spot? What if the support legs built in step 3 won’t hold up the platform?
Let me just tell you- the problem-solving for the challenge was intense!

Problems – and How They Were Solved

Take a look at the photos below. On the left side of the collage you can see two teams that used way too much tape to hold craft sticks together. This meant that when later teams arrived at those tables they were short on tape. Those teams resorted to taking tape off the craft sticks and using it in different places. 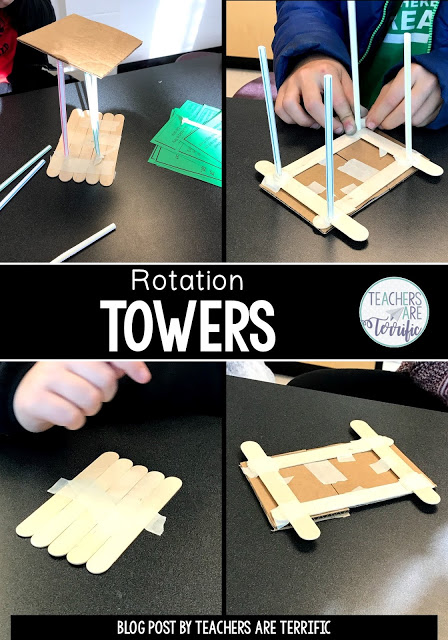 Now, take a look at the right side of the collage.  There were three pieces of cardboard in the supply bins. The tower was required to have a base and two platforms. You can see that the first team made the base using two of the pieces. This meant that the team that came along later to build the middle platform or the top one did not have the materials they needed. Teams came up some clever uses of straws and craft sticks to make a platform.

Yes! There were final towers that just would not work at all. By the time the last team rotated to those tables there was little they could do to salvage what five previous teams did or were not able to do.

The photo below shows what happened because of the second team’s use of craft stick legs. It is hard to get craft stick legs to stand up and stay taped to that base. In the middle and at the top the craft stick platforms were too heavy to be supported and the whole tower just fell over. 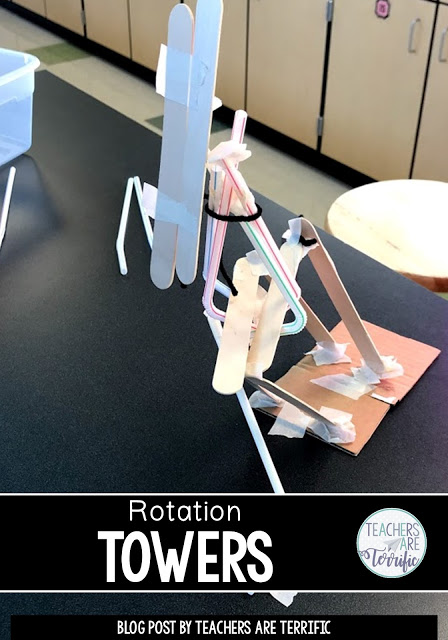 Below is what happened with flimsy straw legs and the heavy craft stick platform. I have no idea why the team at the end made a bow out of the string. A tie-down might have helped this one to be more stable! 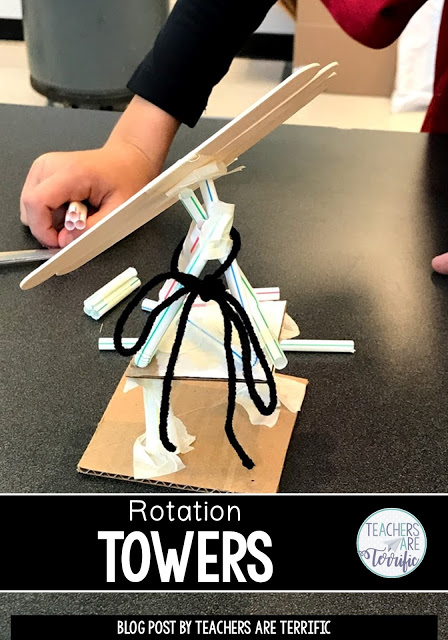 The Real Beauty of This Challenge

This was fascinating. As teams arrived at their next table I heard various exclamations about what was found. I heard, “What are we supposed to do with this?” And various other lines similar to that.
But, they got busy anyway. Each team took ownership of the task even when the structure they found was in need of repairing first. They tried really hard to improve the structure and complete whatever task they had before them.
Our discussion at the end of class was very interesting. We always have a sharing time and show our completed projects. The kids were really excited to see what happened to every single structure because they all had a hand in each one of them. We talked about how one team or another solved a particular problem that might have been found at certain tables.

“Oh, I love the way you used the straws to hold up the middle platform. We couldn’t get it to work when we were there!”

The teamwork and camaraderie found with this challenge were amazing to see.

We also had a talk about the use of materials and how important that was to the success of each tower. In the end, I think the point of my lesson was well learned. Planning ahead and thinking about how each step will affect the whole structure is important. What you do can also affect others.

What a wonderful life lesson learned in STEM Class!