“Blimy, but that fish was slimy…”

Just imagine the giggles you will get with this one. First and second graders love the words and will repeat them with you as you read them over and over. Stay tuned for the book this came from and take a look at the amazing STEM challenge created with pirate books as the inspiration! 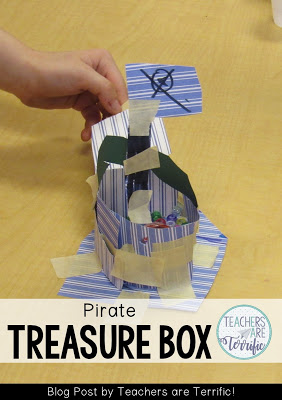 First, you will need some treasure!

We read a pirate book (and actually tried three different ones) and then we built a pirate treasure box.
The treasure was just junk I pulled out of the cabinets- buttons, beads, and craft items (like sequins).
I sorted the “treasure” into cups and each group got a cup full. They probably enjoyed looking at all those goodies as much as anything else! 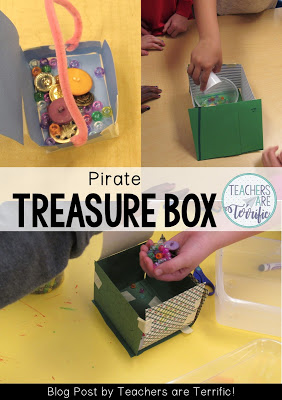 Grab some materials you already have!

Don’t get fancy with this one. I pulled out scrapbook paper and construction paper and some straws. Each team got some masking tape and they started building a container that would hold their treasure. 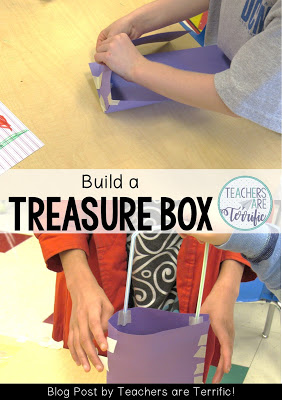 Above are two groups that created a purse-style container. The straw became a handle for carrying the container. 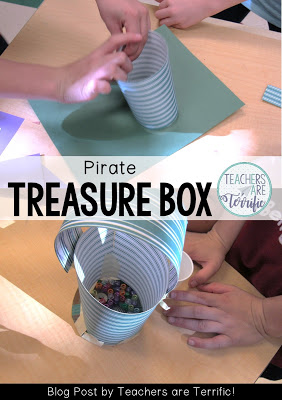 Then we had the cylinders. Invariably kids of all ages will try to build a cylinder. Well, the tube part is always easy, but it’s the bottom and top that cause problems. The team above did really well getting the bottom to be the right size! 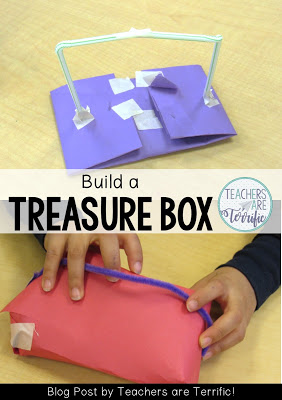 Above you can see two more models that resembled a box and the handles they used. The bottom one actually has a pipe cleaner- so that is one more material you could add to this challenge.

This was the MOST FUN! 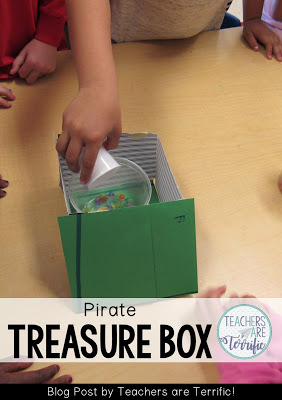 Each team shared the treasure box they had made and then we all watched as they poured their treasure in to see if the box would hold it! It was very exciting to cheer for the teams as the containers worked.

Some Book Suggestions for you:

We have tried all three of these with the challenge of building a treasure box or chest.

This is truly one of my favorite books! It’s a book of few words. As a former classroom teacher (third grade) I always used this book for reading lessons about inferring and then with writing lessons when we studied repetitive phrases.
The story is told in the photos. A little boy sees a pirate ship approaching and watches the pirates dig up their buried treasure on his beach. When they return to their ship the boy sneaks away, too. Later, he steals the captain’s violin and eventually plays it for the scruffy pirates. The book repeats phrases for each set of pages, like this

The line that gets us every time refers to the captain’s pet parrot who appears on every page.

“But when his parrot died, he cried and cried.”

And then the boy helps him bury his parrot in the violin case! I love this book.
The treasure box challenge is perfect with this one!

How I Became a Pirate by David Shannon

This is the story of Jeremy who is at the beach with his family. The family is not paying attention and they don’t see the pirate ship approaching and pirates rowing to shore. Jeremy decides to join the pirates and is soon learning some pirate vocabulary, like

After a storm, the pirates decide to get Jeremy to bury their treasure box for them and he does— in his own backyard!


These first and second graders loved the book and set about making a small treasure box!

If you have read There Was an Old Lady That Swallowed a Fly then you know the premise of this book. In this case, it’s an old pirate that swallows a fish, and then a bird, and then a map, and eventually a treasure chest.

Each page repeats the same sing-song words that end with,

“Blimy, but that fish was slimy!’

Kids love this one and they will repeat the lines with you as you watch that pirate grow. It’s the perfect book to read and then design and build treasure chests.

So, mateys, try a treasure box with your smallest engineers- after reading a picture book! Blimy, they will love it!