My adventures with first and second-grade engineers has been just a fun one! They are eager to build anything and cannot wait to get busy.

The best, absolute best, idea for keeping them engaged is to present them with a short (very short) video or book to set the stage for our STEM task. They love quick little videos, but I also discovered some fabulous picture books that we can read and use as inspiration.

Today’s STEM task is all about being a zookeeper! 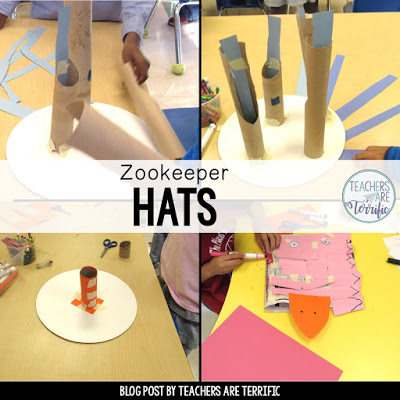 The book we read had a tiny mention of a zookeeper and he had on an unusual hat. That made me wonder if a zookeeper had a specialized hat for his job. That is what led to this challenge! (By the way, book suggestions are listed at the end of this post, including the one we used.)
After reading the book this is the story I told the second graders: You work for a zoo and you make hats for each zoo keeper. The hat must be functional and not just a pretty thing on their heads. Design a hat that has a purpose for a particular zoo keeper.
For example, an elephant keeper might need a hat with a long water hose as a part of it in order to wash down the elephants. Or the anteater keeper might need a hat with special pockets built into it to carry tubes of ants.

So, how did they do with this challenge? 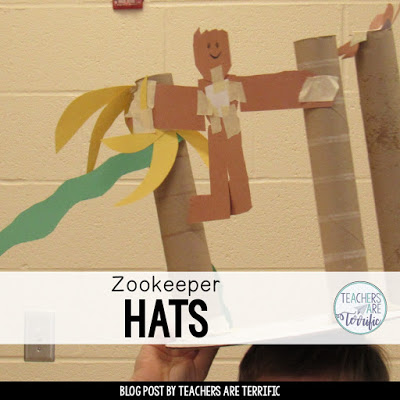 The photo above is the Monkey Keeper. The hat has banana plants growing on it so the food supply is easy to grab. 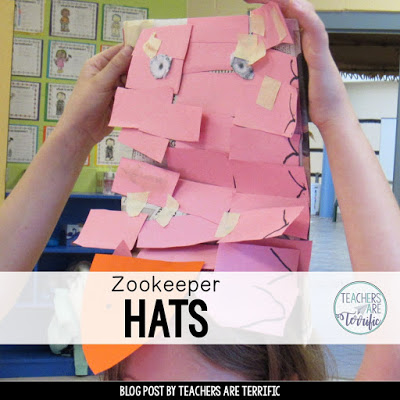 The Flamingo Keeper hat had a bag attached to with bird seed in it to feed the flamingoes. 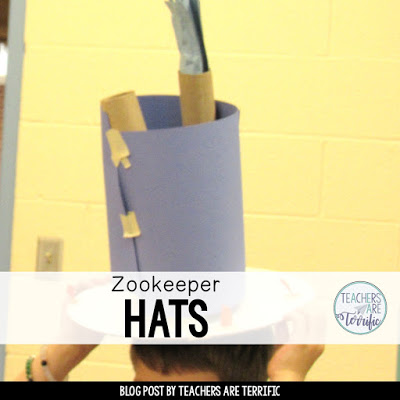 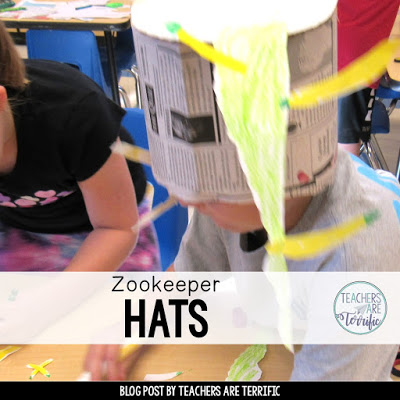 This is another Monkey Keeper hat with bananas. The little engineer is wearing it while they are still coloring more bananas to add to it!

Kids loved this challenge and we had quite a hat parade when they were finished.

Here are three amazing books that we have used for different things, but zookeeper hats would certainly work!

A family gets up one morning to go to the zoo and everyone is excited- except Little T. She is afraid to go. The family decides to try to find out why she is afraid. They act out different animals trying to find the clues. Here is where the book gets really cute.
The animals are acted out in ABC order (one for every letter) and the family uses household props to help. Like for a camel, they hold a tablecloth over three family members and make their bodies into the hump shapes. An umbrella with streamers becomes a jellyfish. Dad wearing a mop becomes a lion that roars.
The animal shapes get more and more elaborate and inventive. (In fact, this book could be a springboard for many STEM creations!)
In the end, Little T decides she is ready to go to the zoo- only when they arrive it turns out that the ticket seller with very long red fingernails is what Little T is scared of!
Delightful book!

If you have read the chapter book about Ivan then you already know this story. This is a picture book for younger children. It is beautifully written and illustrated and tells the true story of how two baby gorillas were captured in Africa and taken to Washington state.

One of the gorillas did not survive, but Ivan grew to adulthood. As a younger gorilla Ivan lived indoors, however, when he became too big he was taken to the shopping center and became the main attraction.

Ivan was finally taken to a zoo where he was taught basics about eating and living outdoors and then he was finally released among other gorillas.

It’s an amazing story, albeit sad. The happy ending with Ivan acclimated to his new home can lead into making your zoo keeper hats. For this one, I would have kids make a gorilla keeper hat and tell them to showcase something with the zookeeper hat that Ivan would need to learn in his new home. Another idea would be to build a model house for Ivan that has things that would make him happy.

This is the book we read! I actually have an E-book copy and we projected it onto our white board, which is a fun way to read books with small kids. Think about it- everybody can see the page!

Rosie is a young girl that takes absolute junk and makes things- usually involving something odd, like spray cheese cans. Most everyone laughs at her inventions. But, her great-great-aunt Rosie encourages her to make a contraption that will help the elder Rosie fly. Rosie does make the device and it doesn’t exactly work well. Rosie thinks she has failed.

Great-great-aunt Rosie lets little Rosie know that she has not failed- unless she QUITS! Powerful message for your STEM class!

Somewhere in this book, Rosie has a talk with her uncle who happens to be a zookeeper and that is the point we went back to as out STEM Challenge. The Zookeeper Hat was born from this fabulous little book!

Your youngest engineers can build just about anything you ask for! They love to learn in this way and reading a book before they build is like icing on a cake! Win-win!