Top
Looking for FREE Resources?
Click Here!
When I was a very little girl my parents lived in Germany and to this day I can remember traveling to Italy in a Volkswagen Beetle. You know, those super tiny cars called VW Bugs? Well, we drove across Germany, Austria, Switzerland, and into Italy to see Rome. On the way, we stopped in Pisa and saw the Leaning Tower of Pisa. Many years later we went back, this time in a station wagon, with my grandparents, and we saw the leaning tower again. A vivid memory of the breathless climb to the top was holding my Popaw’s hand all the way. What a remarkable thing that was! A farmer from Alabama hiking to the top of the Leaning Tower! This iconic tower is, of course, one my students of today always visualize as we begin to build a tower.
One of the first STEM challenges we ever tried was tower building. The kids loved it so much that I started planning more tower building events. We have tried towers with many different materials – like spaghetti, toothpicks, and even penny-toting buckets!
One of our all-time favorite towers is the Index Card Tower.

You will love this one, too because of….

One Material and Easy Prep

We first used this a few years back with 4th and 5th graders and they quickly showed me how inventively they could fold, bend, and roll the cards. And when I say cards, I mean index cards.

Why index cards? Why not playing cards?

Well, here’s the scoop about that! I really thought about using playing cards until I priced them. Even buying them at the dollar store meant 7 boxes per class and with 5 classes per grade level that was too much. The only way it would work might be if students were told they could not bend the cards or roll them. Take a look at the photos below and you will see index cards in several configurations and that is part of the task. How can you use the cards inventively to make the tower work unless you can fold them? 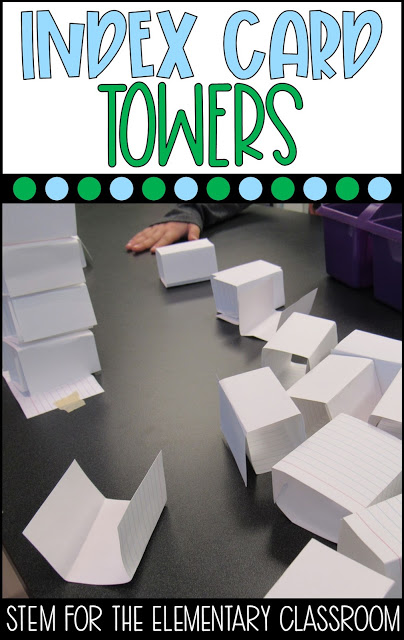 So, one material! Index cards work perfectly. If you really need to, you can allow kids to use a little bit of tape. Mine were given one foot of masking tape! The easy prep for this one is a trick I use- Each team just gets a whole stack of cards. They rarely use all of them. More about this with the clean up for this one- later!

Over the last few years, I have tried this type of tower with many age groups- including first and second graders. Those younger engineers approach the task much differently.
I gave them a little bit more tape and you can see that they made triangle shapes by taping two cards together and they held their rolled columns together with tape. 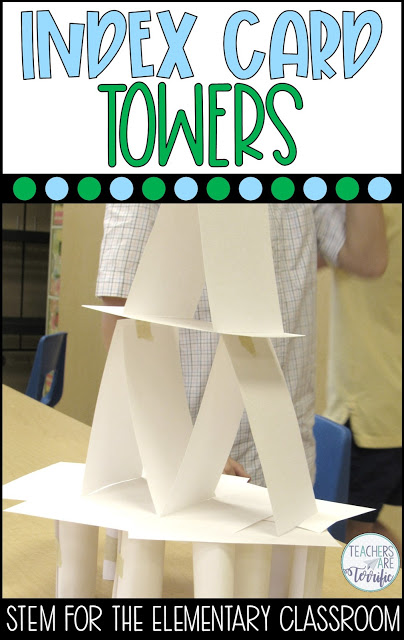 The first graders loved building, but their towers tended to spread sideways along the tables rather than getting very tall.

They also quickly discovered that using a card between layers gave them platforms to keep building on. 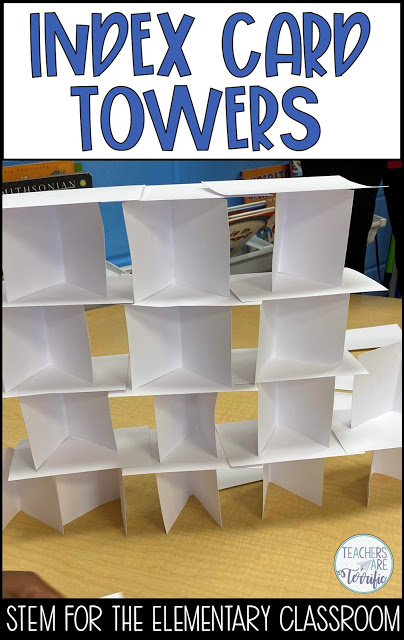 The tallest tower with the little engineers was 85 cm tall. Part of it is in the photo below. The team was so excited they jumped and cheered and bumped the table. And you know what happened then…. lots of groaning as the cards rained down all over the table and floor! 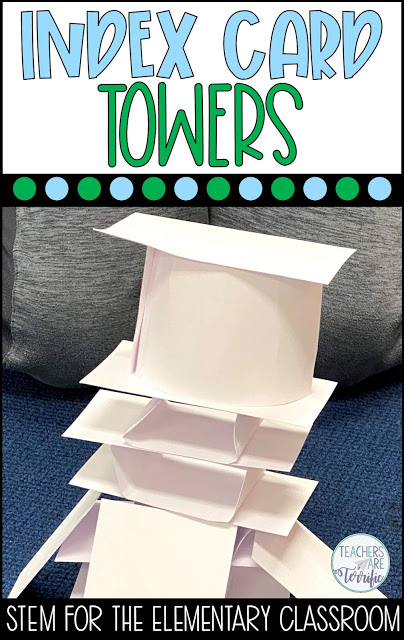 Now, let’s take a look at my older engineers! These photos are from a fifth-grade group that was completely agonizing over the fact that SECOND GRADERS had an 85 cm tower and they were pretty determined to beat them! Their towers quickly grew so tall they couldn’t reach the top of them to make them taller, so they took the building to the floor! 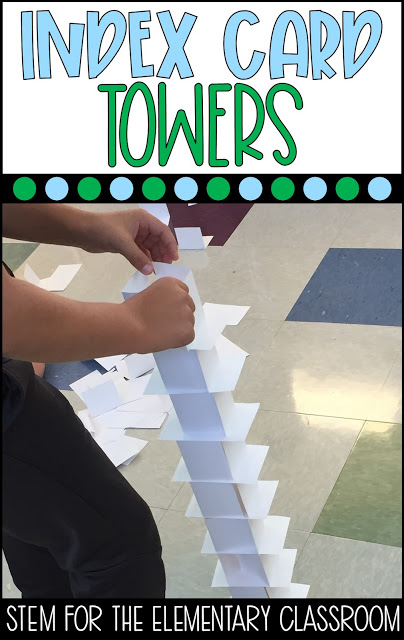 The tallest towers for the older students were 100+ cm. The very tallest was 120 cm. Incredible! The competition to have the tallest was fierce and the groans from these groups were just as loud as the little kids whenever a tower fell.

A little bit about clean up and recycling!

When it’s time to clean up with this task, I put out about four large dish pans labeled: Unused, Rolled, Bent vertically, Bent horizontally. Kids bring their cards and throw in the labeled bins.
When the next class comes in I give them a smaller stack of brand new cards and they retrieve what they need from the already bent and rolled cards as they need them. We completely just keep reusing them! Later I throw all the bent and rolled cards into a large plastic bin, pop a top on it, and save it for the next index card project! 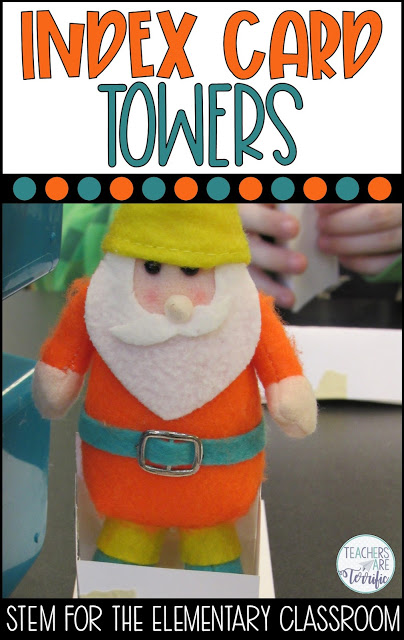 We repeated this challenge right before Christmas this year with one twist- the tower had to hold something! And it might have been that funny colored little elf!

If you need more details this challenge can be found in my Tower Bundle– along with toothpick towers and spaghetti towers! All three challenges have bonus options!

Oh, and just in case you were wondering about that trip to Italy in a very tiny car. I was five and my sister was three so we fit perfectly in the little backseat. It was a grand adventure!