Top
Looking for Christmas Resources?
Click Here!
Are you ready for this? It’s STEM.

It’s the most spectacular event we have ever completed.
Seriously!

And here is why: it is rich in collaborative opportunities!

I had this little brain pop and thought about having students all have the same materials, but each group would build something different. Then I just couldn’t work around how that would be possible without being very confusing and hard to set up. Mostly I think they would not be logical in their structures since there would not be defined rules. So, I knew the constraints had to be a little more complex. Then I had another brain pop. What if two groups had the same materials, each group builds something different, but then somehow they have to join those two structures together!

Each grade level did something different.

The task for my third graders was one group making a bridge and the second group making the tower to place on the bridge. 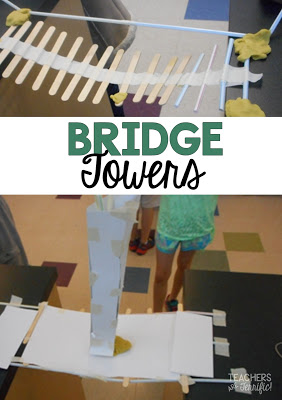 Very quickly the kids discovered if the bridge group did not follow the task rules then the tower would not fit. And the tower group found they would need to consider how heavy their tower was if the bridge was flimsy. 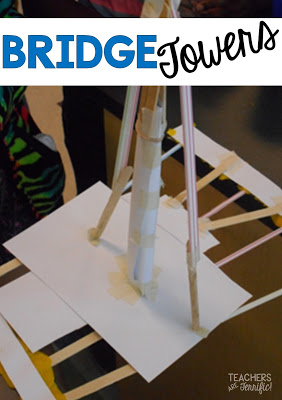 It was the ultimate in teamwork. Each team had to work with the partner group, test their part of the structure, and make changes as needed.
Read on!

The task for my middle kids was to build a launching device and the target to aim at and hopefully hit. Well, you know they loved the whole scenario of this because we had a great talk about a certain game that involves knocking down structures with some very mad birds. However, the target building group had the task of building a target that could NOT be knocked down. That made it a little harder.
Take a look: 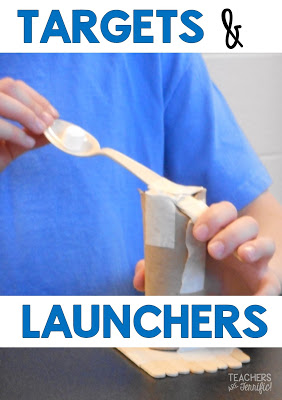 This one was great fun and became very competitive. We hit a lot of targets and did not knock down any. We also learned that a launching device is hard to make and aim! 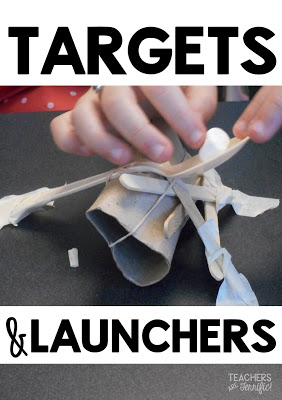 The two groups had to work together to make the target the right height for the way the shooter was working. That was the biggest problem. Lots of targets had to be remade when the launcher would fly the pom-pom over the top.
There’s more!

I’d have to say this was my favorite because of the genius ideas the kids came up with. Probably because they are fifth graders, but anyway I loved the results!
Take a look: 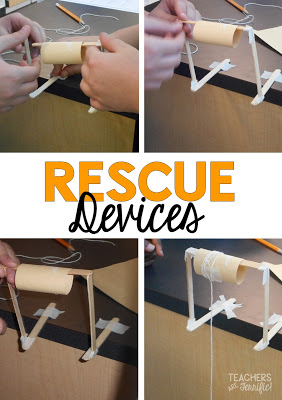 Their task was to design a rescue device and a rescue container. The rule for the rescue device was that it had tobe  mounted on the side of a “cliff” and able to be operated by someone standing on the cliff. 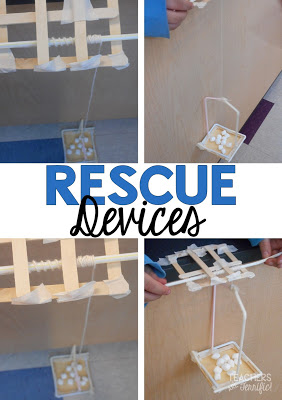 Do you see those genius cranking systems the kids made? These two groups had to work together to be able to attach the rescue containers to the cranking system and not make it too heavy. Awesomeness, indeed! 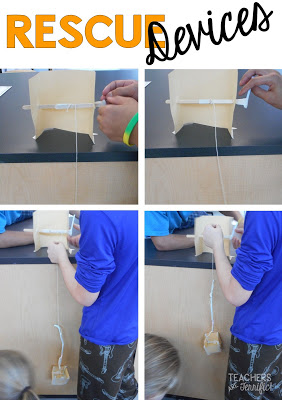 Watching them test and redesign and test again was so interesting.

Well, there you have it! STEM is already filled with conversation and collaboration, but the plan for joining these two tasks together made the best-ever set of challenges! Kids loved them and you will too!