Top
Looking for Summer Resources?
Click Here!
Books have a way of getting inside my brain, but I’m not sure about the homesick part! I do know when I love a book I cannot put it down and will read late into the night or get up early to read! Those are the books that I finish and actually miss the characters- as if they were part of my life. And basically, they are.
Here’s five I read recently that I can recommend to you! I hope they keep you awake! Enjoy! 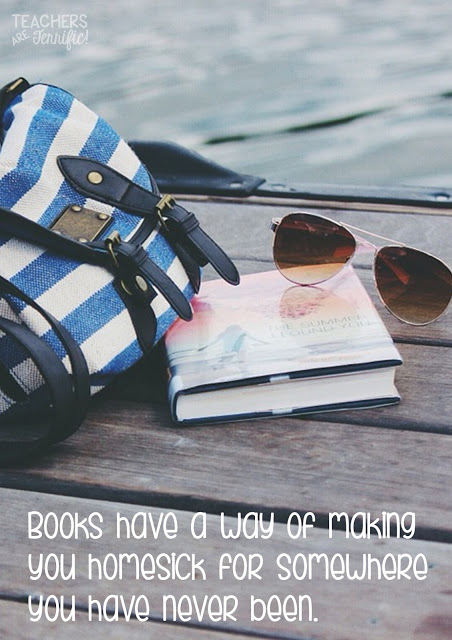 This was a good month of books! I can recommend all these listed below! That’s something! I usually have a stinker during the month!

We Were Liars by E. Lockhart

This book is about a wealthy family that has several homes on a private island. Each home was built for a different sister of the family. In the summer the entire family converges on the island and they just have a great time— or do they?
It turns out that each part of the family has its own personal story and not all of them are happy. The main character (if there is one) is Cadence, called Cady. Early in the book (like on page 5), you find out that her father decides to leave her mother and here’s the passage that really was powerful: Dad is getting in the car to leave and the book says,

“Then he pulled out a handgun and shot me in the chest. I was standing on the lawn and I fell. The bullet hole opened wide and my heart rolled out….”

Well. You can bet that got my attention, but it seems that the author of this book uses passages like that often. So, just know that you will encounter some sentences that are astounding only to discover it is an overuse of imagery.
Okay, back to the story… While on the island, age 15, Cady goes off swimming alone, in the ocean, and has an accident. She ends up with a brain injury that creates headaches and loss of memory, including how she was injured in the first place. The story develops as she returns a few summers later and encounters her cousins and a boy she apparently loves…. and I will leave with that.
So, should you try this book? It is a powerful little book. The writing is interesting. Lots of imagery, weird time jumps, and odd use of storytelling in the background. In the end, it is quite startling because you might not see it coming. Yes, you should try it!

Before the Fall  by Noah Hawley

This book opens with the loading of a private jet with a wealthy family of four, two more married adults, and Scott Burroughs. Scott is a local artist that was invited to just hop a ride on board rather than take the ferry. (They are on Martha’s Vineyard and headed to New York.) Scott boards the plane late and within minutes the plane has crashed into the Atlantic. Scott survives and then discovers that 4-year-old JJ is also still alive. So, what does he do? He takes the boy and swims to shore- maybe 10 miles.
Following this horrific event, the book delves into the back story of each of the characters. The FBI gets involved, Scott is blamed for the accident, the US Treasury is involved, the back stories of each character seem to be intertwined. But, are they? Was Scott involved? In the middle of this, you discover that a TV personality with a talk show (think Nancy Grace) wants to exploit every part of the story and does so with little thought for the actual truth. The NTSB is trying to recover the plane and the black box to find out exactly what happened. In the end, the truth of the crash will be a surprise.
There are some passages that are a little distracting and the back story about the kinds of pictures that Scott paints seems a little unnecessary. I also found the writing style concerning conversations was extremely disjointed. No one, NO ONE, could ever finish a sentence. I think in real life plenty of people are more well spoken than the people in this book. But this a page-turner- very compelling!

Don’t you just love Stephen King? I am guessing I have read just about all his books (except for that period of time right after his accident when his books were off course just a tad). About three months ago I read Mr. Mercedes and in that book, the character of an ex-cop named Bill Hodges was introduced. This book continues with that story. In fact, one of the main characters was injured in the car attack of the other book. In that car attack, you also meet Brady, the man that was responsible for the attack and he reappears in this story.
The story begins with a famous author, John Rothstein, being attacked in his home. Money and manuscripts are stolen, and then years later the money and notebooks of new books are found by a teenager named Pete. Pete, at age 13, knows his family is in financial trouble and he uses the money to help out. A few years later he decides the manuscripts from the deceased author can also be used to make some money.
And then we have the murderer of that author, who is now nearly 60 and has spent all these years in prison for another crime. He is paroled and you know what happens next, right? He comes back to find the money and notebooks that he hid.
Bill Hodges and his helpers, Holly and Jerome, get involved. Full of action and a typical Stephen King page-turner! You are going to want to read this one- but read Mr. Mercedes first! And, remember, Brady, the man responsible for the car attack in the first place?? Well, just know this book has a typical SK cliffhanger at the end!

The Bartender’s Tale by Ivan Doig

This book begins as Mr. Doig’s books do, by diving right into the story with rich and vivid details. It’s 1960 when you meet 6-year-old Rusty who has been living with his aunt and cousins in Arizona until Dad arrives to take him home to Montana. Back in Montana Rusty learns about his dad’s business. He’s the bartender/owner of the Medicine Lodge, a tavern. The backroom of the lodge becomes Rusty’s second home as he discovers it is full of amazing items that bar patrons sometimes offer as payment for their drinks. Periodically, Rusty’s dad takes a load of the items over the border to Canada to sell and make extra money.
In the meantime, Rusty meets Zoe and they become great friends who like to build airplane models, mimic and eavesdrop on the bar customers, and then get a taste of acting with a local woman. Everything is going along smoothly until trouble comes. That trouble comes in the form of Proxy Duff, a taxi dancer that knew Rusty’s dad many years before and, in fact, shows up to tell him that her daughter, Francine, is actually his daughter. (By the way, a taxi dancer is a woman that was paid by tavern patrons to dance with them.) Anyway, at this point, the book takes a turn and gets very interesting- stick with it through the slow parts! There’s an unexpected twist at the end about Francine and her mom.
I love this author. I love his books. But, you need to know the writing is different. This book is not an action-packed page-turner. Whole chapters can be devoted to going fishing using chicken guts as bait and learning to bait a hook. One little section told the hilarious story of Rusty and his dad and the half-sister stripping a friend naked in the tub in order to pick ticks off him! Doig’s style is slow and detailed, but the writing is rich. The books are worth the time!

This author is one that resonates with me in so many ways. Many years ago my husband and I were on a trip to Lake Tahoe and drove through the town where Jaycee was held captive for 18 years. About a year later she was found and I still remember thinking that we were so close to where she had been hidden away and we never knew it, nor did her neighbors. Her first book was one I read in one sitting and I ached with the horror of her writing. I have watched her story on television through interviews with Diane Sawyer. Jaycee is a resilient, beautiful, kind woman and I admire her courage so much.
This book picks up with her life after her rescue as she encounters the first time she gets to do things. Being held from age 11 to age 30 left her without the ability to do things we take for granted- like driving a car, going to high school, going to the mall, learning about cell phones, and so much more. Read both her books. It will forever leave an imprint on you!
Maybe, that imprint that books leave on us is exactly what this month’s quote means. We are homesick for that feeling books give us…