Top
Looking for FREE Resources?
Click Here!
Y’all, about five or so months ago I was working on some Christmas STEM ideas and we did actually do one of them. The kids loved it, but then we ran out of time (because it was December and that’s how it goes during that month…you know what I mean) and I abandoned those seasonal specific STEM things.
Then I had a brain pop! What if I could invent some more seasonal STEM challenges? What if I could actually come up with some things for just about every month? So, I set off to do just that. More about this later!
For right now, let me just tell you about the month of APRIL and the EARTH Series!
The fabulous month of April just happens to have the best day ever on which we celebrate the Earth! We tested three STEM challenges to go with Earth Day- Solar Ovens, Earthquake Structures and…..
Water Pipelines!
Yep, real water….. 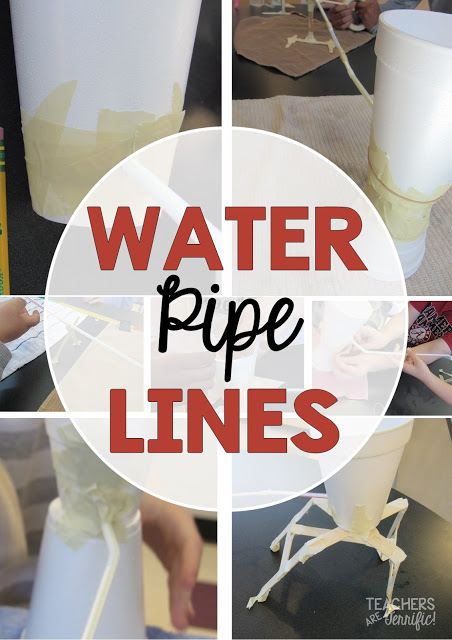 The materials behind this challenge are just super easy peasy- three main things (cups, straws, and tape.) I was actually worried that this might be too easy….
Ha! 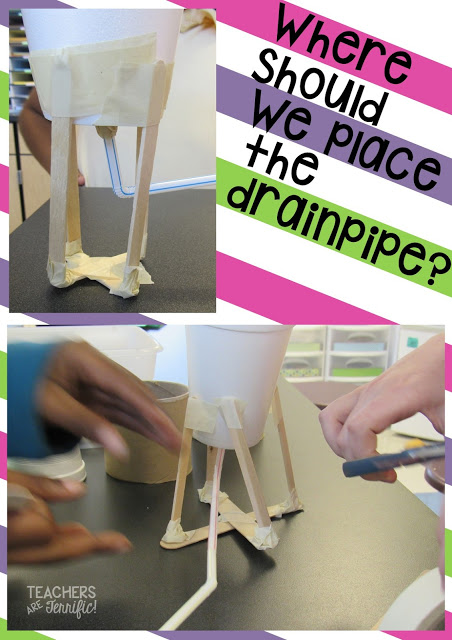 I never in a million years thought kids would place the elevated tank draining straw near the top of the cup. Here’s the thing. If the straw is close to the top of the cup, then the drain pipe stops working as soon as the water level drops below the straw.
So, the straw drain pipe has to be closer to the bottom- or like the above photos, maybe even smack in the middle of the bottom. 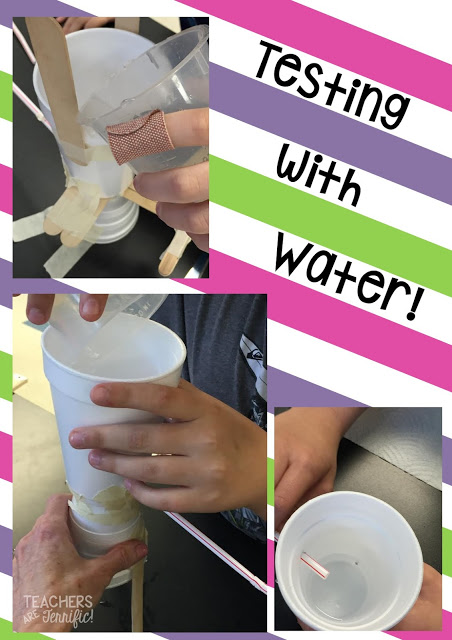 When kids were ready to test their structure we poured water into the top tank and waited to see what would happen. Two things happened:
ONE: It worked and water traveled the whole pipeline and flowed right into the bottom cup, which produced squeals of delight and kids hopping up and down because they really didn’t think it would work.
TWO: It worked, but it LEAKED: 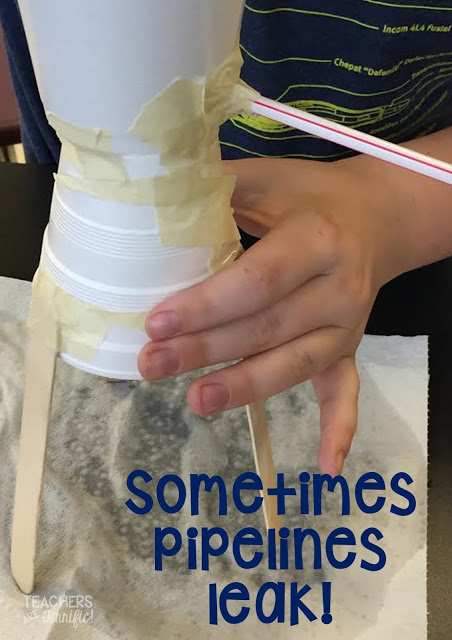 We had lots of dripping and puddles and went through two rolls of paper towels before I thought to bring out the real cotton towels. By the way, real towels are much better than paper ones for this challenge. The absolute funniest moment of the lab, like ever, was when one team poured water into their top tank and as the water started its pipeline path, EVERY SINGLE PLACE POSSIBLE dripped. All of them. The team was all standing and holding their hands under the drips to try to catch the water, but they only had six hands, and lots more than six places were dripping, so they were hollering to their friends to bring cups to catch this water and pretty soon we were all just laughing. 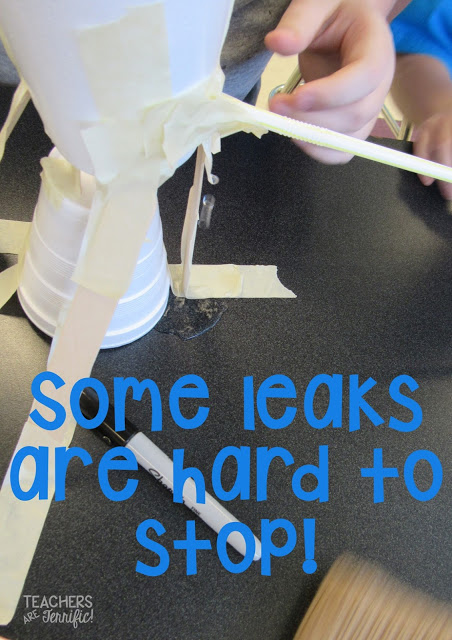 First of all, check that photo- I accidentally caught a drop of water falling! Fabulous!
Anyway, the worst thing was patching the leaking places. You cannot put tape over wet spots so kids had to dry off the pipeline and cups to make repairs.
In the end, we had a fabulous learning time. The pipelines really did work! I’d say half of them were functioning with only minor leaking in one or two places and we did have ONE that never leaked at all. We also had great talks about why you would need a pipeline and the scenario behind the reason for this challenge was quite intriguing to consider. It was all about dogs, and water for the dogs, and avoiding a household chore by inventing an easier way! Ha!
Now, here’s more about the other EARTH Series challenges:
Click here for Solar Ovens
Click here for Earthquakes
The other Seasonal Series tasks are:
Snow Series
Heart Series
Wind Series