Top
Looking for FREE Resources?
Click Here!
The very first time I pulled out foam tubes and marbles and mentioned roller coasters I knew my students were hooked on STEM forever. That challenge is their very favorite and it’s one they ask to repeat all the time.
It’s a fun one, but in my mind, I always wanted to create a different kind of roller coaster. Could we try something with tubes? So, one day I gathered together a bin of about 6000 cardboard tubes and rolls of masking tape and we got to work! 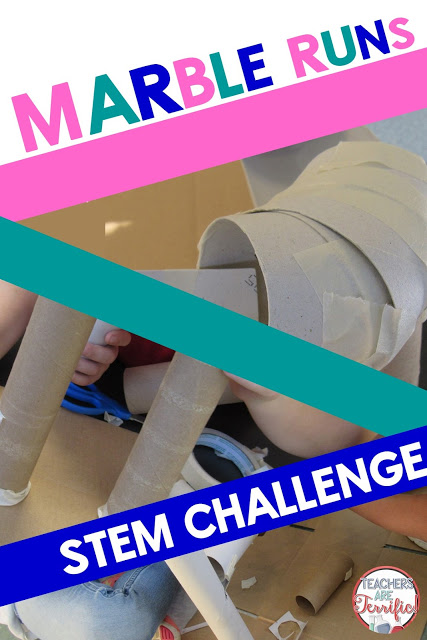 This is going to be a simple one for you to try!

LOTS of cardboard tubes
Large cardboard pieces or foam board
Masking tape and lots of it
That’s all. Seriously. Okay, ask parents to send in the cardboard tubes from toilet tissue rolls and paper towel rolls. If you really want to get a ton of these, just mention that this is material they can send in and IT’S FREE! That’s what I did and I have enough tubes to last until the end of time.
You really need good sticky masking tape, but you are going to use a lot of it so get some at Wal-Mart. It’s in the painting department and they have rolls that are 96 cents. For the cardboard pieces, I used packing boxes that I cut apart with a razor blade knife. You can probably ask your cafeteria to save their boxes for you. If you decide to use foam board, get it at the Dollar Tree. The cardboard or foam board is for the base of the marble run.

Here’s what you do:

Show your kids some images of marble runs to give them an idea of what to do. I showed images of upright runs that resemble roller coasters and also images that are taped to a wall or the front of a table.
Give them the stuff and sit back and watch what happens! 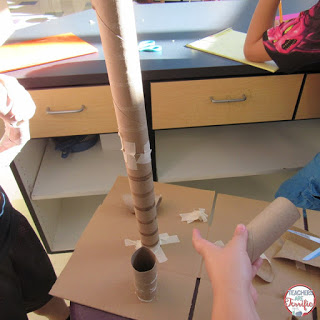 If you happen to have any really long tubes you will have groups that try to use them. Trust me, that really long tube in the photo did not work. It is just too heavy to be able to stand upright. Taping it at the bottom was just not enough. 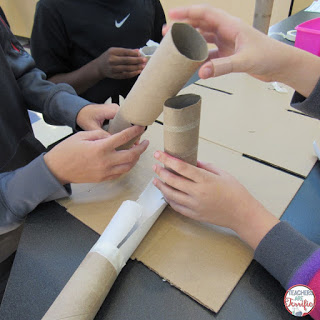 How do you join tubes together?

Kids found some clever ways to do this. Mostly they cut a slit into one tube and slipped the second tube into it. We had a lot of cutting tubes in half to make the paths. 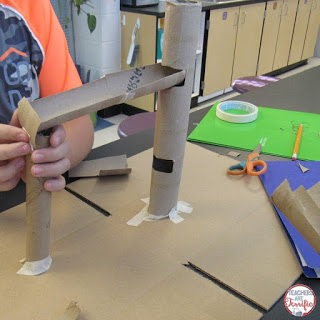 You can see the holes the kids cut into the tubes in this picture. Yes, you will have to supervise this and show them how. If you have an expert you can send that kid around to show others how to do it. Basically, you flatten the tube and cut out the rectangle and then pop the tube back into a round shape. It works! 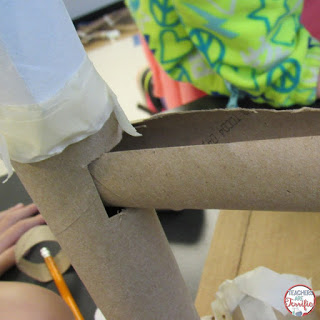 Here’s a close up of tubes connected. The only problem was that if the tube inside moved a little the marble had enough room to drop down into the standing tube. Which was pretty hard to retrieve unless you took apart the taped down tube. 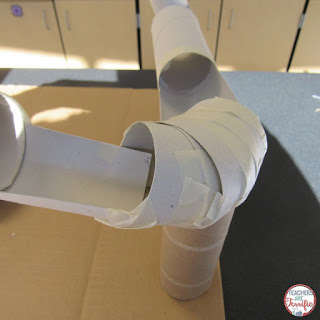 Next problem we encountered was making a turn in the pathway. How do you do that? Here’s what one group did: They cut a tube in half horizontally and then cut that half tube into inch wide pieces. Those pieces were taped one at a time barely overlapping each other and gradually making the turn. Can you see it in the photo? 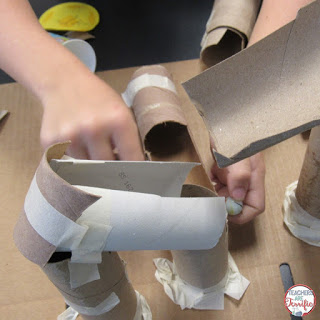 Here’s another way to turn! Make side rails with tube pieces and the marble will be forced to stay on the path. And yes, we chased marbles around a lot! 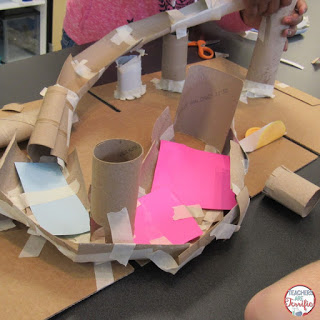 Here’s another way to make those turns. See the colored paper? This team had too much space and exposed pieces of tubes. So, they used construction paper to cover their paths.
This was a messy project by the way. Lots of pieces laying everywhere and the finished marble runs also had a messy look to them.

How do you connect tubes in an upright position? 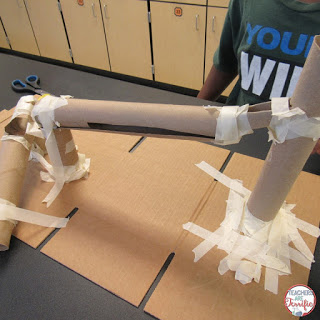 Here’s another problem we had to solve! How on earth do you connect those standing tubes to a piece of cardboard. Well, this group decide a whole roll of tape would do the trick. 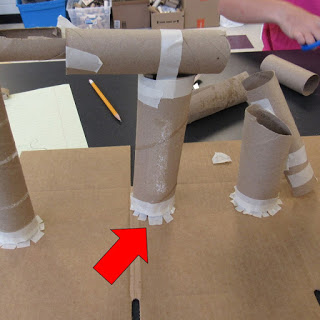 Then I remembered an old sewing trick about fanning out the edges of rounded shapes as you sew. So I showed kids how to do this with the tape. See the arrow pointing at this? It works! And kids taught each other how to do after I showed one team. 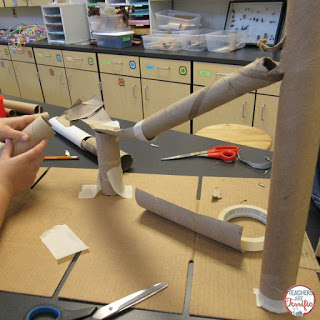 Here’s one that has an interesting turn thing going on close to the hands in the photo. Looks like it needs side rails to me. Actually I included this photo so you could see my messy room. Look at that counter top in the background.
Are you kidding me? What a mess. Hey – 15 classes- sometimes doing 6 different projects all at the same time. It gets messy.

Finally take a look at this: 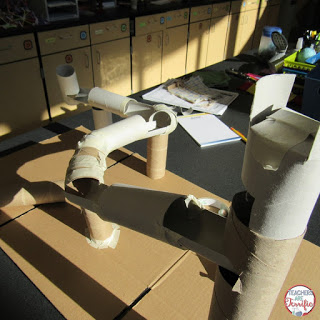 All finished! Don’t you love the way the sunshine comes in my classroom?
So, are you brave enough to tackle this one?!
I am going to have to say that the mess was far outweighed by the enthusiasm for this project and the end results! Messes can be swept up and the learning was priceless!