Top
Looking for FREE Resources?
Click Here!
If you are here thinking this might be lab tools like beakers and Bunsen burners then stop reading right here. Just kidding, you should go ahead and read this anyway. It will be helpful,
especially if you have kids in your room that think scissors are meant to poke and stab things…
So, let’s get going. Mind you, I will say this repeatedly, these tools are for teachers to use ONLY!
Danger, danger, danger! Seriously, I will explain!

Here’s the truth. Kids have no idea about using sharp things correctly. And, I mean even if you have told them eight bajillion times, they will still pick up scissors and swing them in the air on the end of their index fingers. (Am I right?) They will still use the point of scissors to try to stab a hole into something like cardboard. They will try to cut craft sticks in two with scissors. Do I need to continue?
I think you get it. They think they have no kryptonite. They are invincible. So, listed below are five things that have happened to us and the tools that I found to try to keep us safe and keep me less crazy. 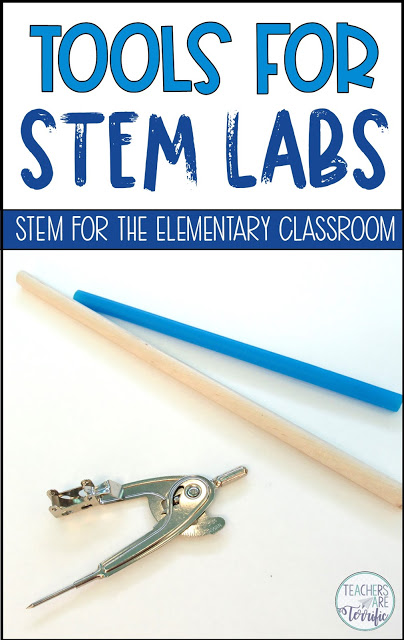 Now, that is a pretty weird combination of tools! But, let me tell how this came to be. We were using water bottles for something and the kids needed holes in them. I didn’t think through this one very well and nearly had a heart attack when I saw a kid bearing down with his scissors to poke a hole. I mean teeth-gritted-bearing-down like he was drilling to China! I probably screamed and I couldn’t think of words to say fast enough so I just hollered, “Danger, danger, danger!” And that pretty much is what we still use. My lab kids have learned that when they hear me say that phrase they MUST stop what they are doing. FAST. Cause Nurse Buck doesn’t like to run down the hallway to revive me.
So, what are those tools in the photo you ask?
Well. at the bottom is a device called a compass. It’s actually for making circles, but I use it for sticking through things to make tiny holes. It’s super pointy and will go through about anything.
The large dowel and milkshake straw are for sticking into things to pop them back into shape- like a squished water bottle! 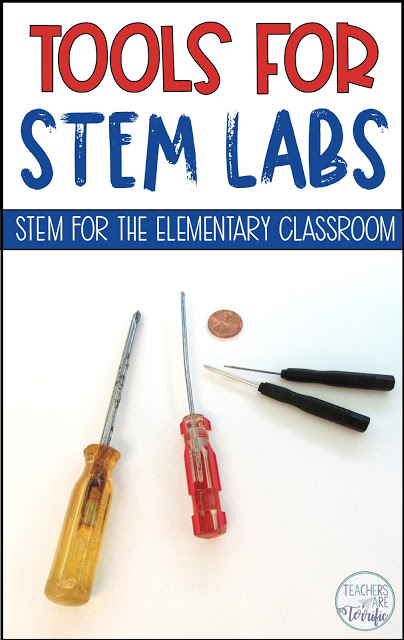 Not long after the water bottle catastrophe, I glanced up just in time to see a student trying to slice into a piece of cardboard with, you guessed it, open scissors. Like he was holding the blade in his hand and pushing at the same time to get the other blade through the cardboard.

came out of my mouth. I flew across the room and was probably saying something like, “Are you nuts?” but probably not cause I could get in trouble for that. But anyway, the student was quite surprised that I thought he shouldn’t do this and said words you should never say to your teacher, “My mom lets me do this!”
My reply was, “I’m not your momma!”
So, those tools are all screwdrivers and all are used to make holes in pieces of cardboard. To be safer for me I usually use the compass to start a hole and then make it larger with the screwdrivers. They also come in handy for tightening the two labs stools that have wonky legs or for repairing glasses! 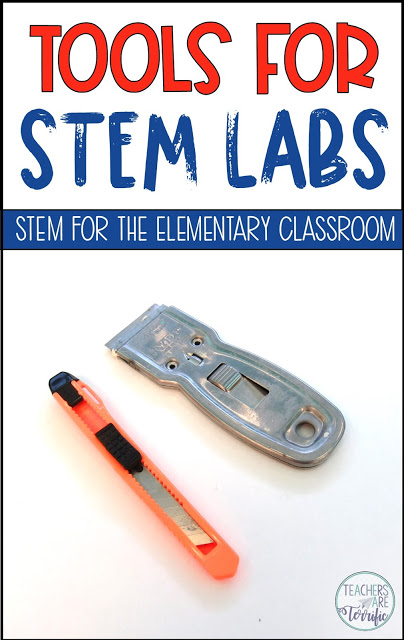 Well, you would think I have yelped about safety often enough that the kids would get it, but no, they will still try to cut things with scissors that just won’t cut. Like long pieces of cardboard. One day, I looked up just in time (why does this happen all the time, I should pay more attention or be less busy or something) to see a student with his scissors jammed in the middle of a piece of cardboard and he was trying to open and close them with both hands. The cardboard was just dangling. Of course, I shouted the ‘danger’ thing and zipped over to tell him I was not his momma either, and he said, “Well I thought it was safe and okay.” At which point I said,

I probably hollered that, too, cause I could see that whole cardboard piece slipping and him stabbing himself in the leg and that would be a problem.
So, of course, those two tools are box cutters or razor blade knives and you just have to say those words to think, “Danger, danger, danger”, especially if you are thinking like ME! I mostly use them to cut cardboard apart. I have a large really thick piece of poster board that I lay across my work table and kids bring me whatever it is they need cut and I lay it on the poster board and cut it in about 2.5 seconds. (The poster board protects my tabletop!)

“Scissors are for cutting paper!” 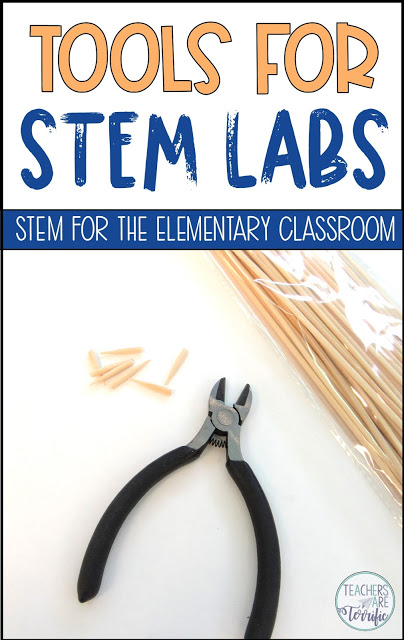 Seriously I thought kids knew this about scissors, but apparently, that is not something they are taught until I get them and look across the lab just in time to see them trying to cut a craft stick in half. Or a dowel stick. Or a pipe cleaner. So, the first time I yelled, “Danger, danger, danger” and then proceeded to stop class to announce that scissors are only for cutting paper, good grief, you would have thought I had suddenly grown two heads. They looked at me like I was crazy. I think I said, “And don’t even try to tell me your momma lets you do this!” So, now we have the rule that anything wooden can only be broken or cut by the cut master, which just happens to be me.
I use those little wire cutters that you see in the photo. And just so you will know, you should always snip off the ends of bamboo skewers before you give them to kids because they WILL poke each other with the pointy end. (Just be safe and hold the pointy end in your hand when you snip it because it will fly off and that’s a danger, danger, danger thing.)

“But now it has slob all over it!” 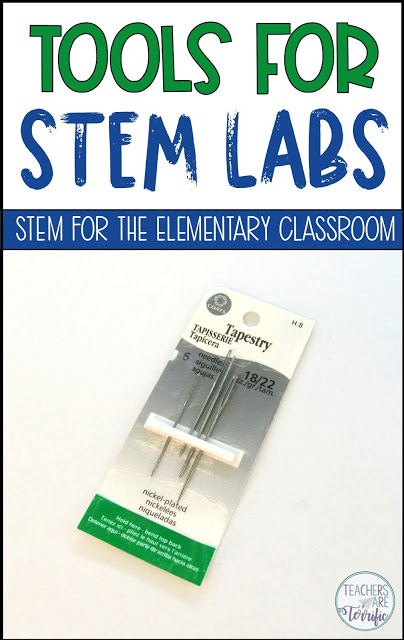 Yeah, well, you are going to love this one. We were building suspension bridges when I looked around just in time to see someone (again) putting the end of the suspension string in her mouth. “Danger, danger, danger” didn’t seem like the appropriate thing to scream at the time, so I think I just said, “AGHHHHHHHHHHHH!” Then I ran over to try to sweetly ask why the string that they were using on their structure had been in her mouth and was now dangling in the air covered in her spit.
She explained that they were trying to thread the string through the holes in the bridge to help hold it up, which, she reminded me, they were supposed to be doing. I answered, “But now it has slob all over it!” (You would just be surprised how often I hear that phrase repeated now, cause the kids just thought it was hilarious. Me, not so much.)
The tools I found just for this circumstance were some quite gigantic needles that we could thread the string through- after we cut off the wet part- and the kids could finish stringing up their bridge.

So, there you have it, some basic tools for you to have for making holes, and threading things, and cutting things, and keeping your kids safe. Do keep your own little fingers out of the way of those sharp things and keep them all stored away from the kids!

(And, by the way, all references about yelling, screaming, and hollering are hyperbole. Just so you will know!) 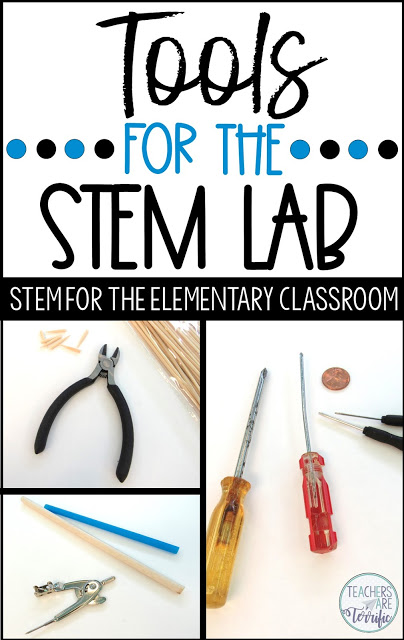