Top
Looking for FREE Resources?
Click Here!
The topic of failure is one I write about often. You see, my classroom is a lab.

A place to experiment. A place to make mistakes and learn from them. A risk-free, test-it-and-see-what-happens kind of place.
We mess up all the time.
And it is OKAY!

WARNING: There is a good bit of hyperbole in this post! I don’t yell in my classroom unless we are cheering. And I don’t actually say some of the things I have written in this post- at least not in the exact words 🙂

So, last spring I spent a blog post writing all about some major goof-ups we had experienced and it was a popular post. Not a pretty post at all, as you have come to expect. Little did you know, that not ALL of my STEM events are spectacular.
Some are rather ugly.
So, here are our latest flubs, awfulness, and total wacky mess-ups.

Enjoy! And just know that these failures have taught us so much- mostly we learned that being scared to fail is a perfect way to never risk trying…. Keep reading! 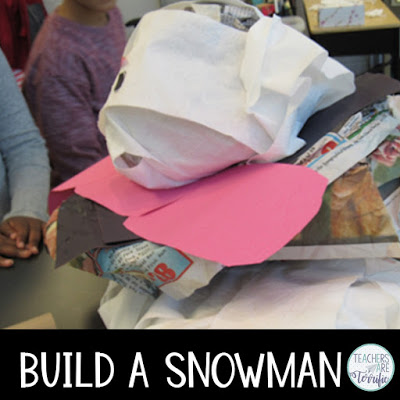 Okay, I had this terrific idea about making snowmen. And, mind you, it was a GREAT idea and eventually worked in the best way, like ever. But only after the test class helped me work it all out.
In the test class, I neglected to mention that the snowman might need to be small. And because my kids are super competitive (even though there is NEVER a prize for winning), they set out to make the largest possible snowman they could.
Hence that monstrous looking thing in the photo.
One of the supplies is a roll of toilet paper. I never dreamed any group would literally use the entire roll, but this group did. I would not give them a second roll so part of their finished guy was purely the food ads from the paper.
Next class had better rules about the task from me!
Failure on my part in not thinking through the task rules or at least my instructions!

Yes, you read that right. 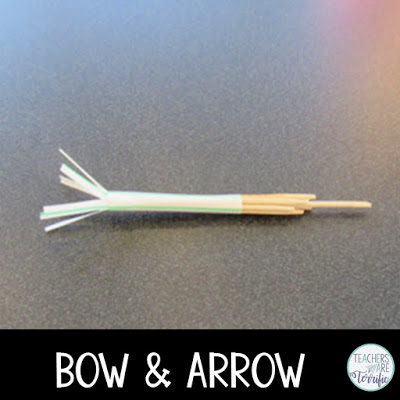 I had this brain pop one night and thought some Cupid Bow and Arrows would just be the best STEM event in the world. I know what you are thinking, and no, I am not crazy. Just excited about the possibilities—- so much so that I didn’t think this one through all the way.
Failure on my part in not expecting kids to do what you see in that photo.
Using a box of materials, which included toothpicks, they were to build the bow and an arrow.
What did I think they would do with those toothpicks? Well, jeez, I never thought they would use them for the point of the arrows. And when I saw it happening I distinctly remember yelling, “Are you guys nuts? You can’t use those pointy things on your arrows!” At which point a kid with a very arched and raised eyebrow said, “What did you think we would make the arrows out of?”

“THE STRAWS!” I yelled back.

Then I went around with scissors and cut the points off all their arrows. Cause, yep, they all made pointy arrows. And let me just tell you this in case you don’t know it—- round toothpicks can stab you. Like poke into your finger and stab you. So, at the end of this test class, I put the toothpicks away and the next classes had Cotton Swabs instead. Keep going. There is more about the bow and arrows…. 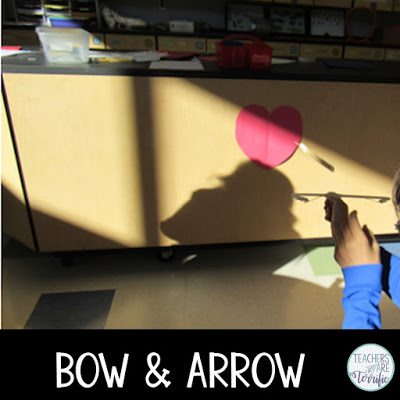 Now, you have to admit that is the BEST picture. You can see the arrow flying through the air! Total accident- I am not that good with a camera! Anyway, total failure on my part (again) in thinking that target practice using the lab tables would work.
I put those cute little heart targets up and told the kids to shoot at the hearts when they needed to test their bows. A few minutes later I distinctly remember yelling, “What are you doing? Are you guys nuts?”  Cause it was about then I looked around and saw an arrow flying toward a lab table, but all the teammates were standing behind the lab table!!!!!!
We had to stop class for me to get my blood pressure under control and then sweetly explain to the children that they could NOT stand in the line of fire, particularly with an unpredictable craft stick bow and pointy ended arrow flying at them!
DISCLAIMER HERE (AGAIN): I am maybe using some (okay, a lot of)  hyperbole or similar figurative language in describing exactly what I yelled or that I yelled at all. I do not normally call my students nuts. Or yell at them. But with the target practice thing, I might have.
By the next class, I had targets on ONE spot of my wall and a list of strictly followed rules about when and how you could fire your Q-tip arrows. 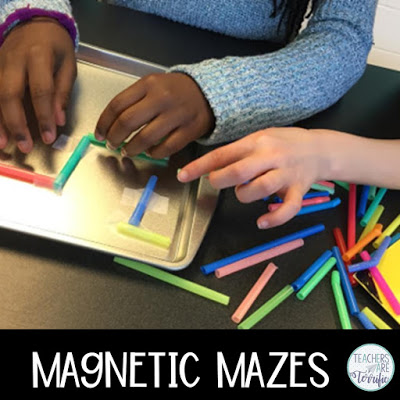 I truly thought this would work.
We have built a lot of mazes and kids love them. So, I thought a magnetic one would just be super cool! I found the cookie sheets at the dollar store and for a mere $8 had enough for a whole class. I gave them a pan and a magnetic marble and some magnets- fully expecting that a magnet pushed on the bottom of the pan would make the magnetic marble on the top of the pan move.
Uh, well, no.
Epic failure on my part in not testing ONE pan before I purchased eight of them. My magnets were just not strong enough. We could make a paper clip move, but the magnetic ball stubbornly stuck to one spot. This one did turn out okay, however, because the kids did build some great mazes and I did find one hockey puck size magnet that we shared and were able to follow our maze paths. 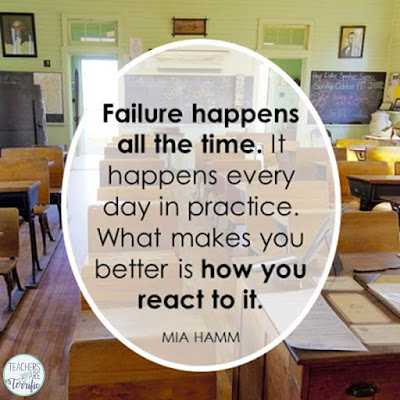 Now, I just have to end by telling you this. We fail every day in the lab. My test classes always know that I have no idea how something is going to work and they know I will stop them when something is going badly wrong so we can re-do, redesign, add a rule, or otherwise fix an unsafe thing- like toothpick arrows.
These examples were all failures on my part and that is the coolest thing ever. The kids see me fail and pick up on how I handle it. For the most part, they see me getting wide-eyed and puzzled at why something didn’t work like I thought it would, but here’s the thing.
THEY NEVER SEE ME GIVE UP. They never see me being afraid to stick my neck out and try something over.
I hope, with all my heart, that this triggers diligence and perseverance to finish every task, even when it seems that it will just never work. Never give up. Try again.
I really believe that kids learn more from the things that go wrong than from the things that work correctly. When is failure alright? When you learn something from it- that’s when! And this happens with us every single day!
That is why I love STEM so much.
Well, that and the fact that it’s not every day you see a toothpick arrow flying through the air. 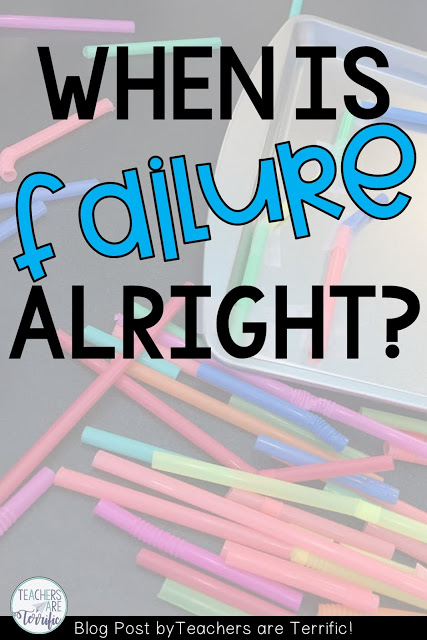