Top
Looking for FREE Resources?
Click Here!
Here it is Friends!
Part 3 of my Summer Series to convince you to try STEM!
What’s our topic today? 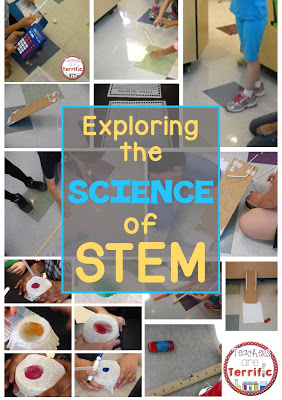 Just a quick recap! This is part 3 so you will also want to take a look at Parts 1 and 2:
Part 1 was All About Supplies
Part 2 was about Collaboration

Alright, let’s talk about Science!
Folks, I started teaching like about, well a large number, of years ago. Here’s how we did science. We opened our text book. We read a section. We answered the questions at the end of the section. We moved to the next section. About every 30 pages in the text book we would find that magic page with an actual experiment on it. Sometimes I was able to do it as a demonstration, but NEVER did the whole class get to participate.
So, today’s kids are so lucky to have hands-on science and STEM!

When I had the chance to be a STEM Lab teacher I was all for it!
Now, let’s break this down into a list (cause I like lists!)

I had to back up and really teach the scientific method. I also created some visuals that are still hanging on my lab wall and we refer to them EVERY SINGLE DAY! 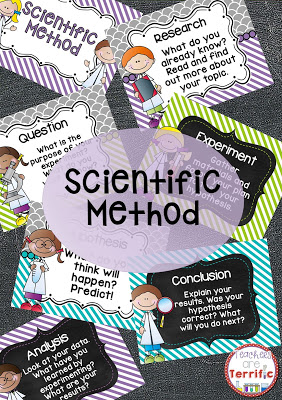 I have these mounted in  a vertical line that I can stand under (Course I am really short). Promise, we use these everyday! It’s a STEM Lab, but we experiment and use science vocabulary daily!

Science Thing 2: Newton
So, after a few lessons about variables and controls and the scientific method, we finally moved on to the first design activity that uses these terms and some more great science with Newton’s Laws of Motion.

Newton is really perplexing to kids. First, they have no concept of time and cannot imagine a person living hundreds of years ago and then when you start quoting the Laws of Motion they get a glazed look on their faces.
To be honest, so do I!
I mean, do you understand this:
“Newton’s first law states that every object will remain at rest or in uniform motion in a straight line unless compelled to change its state by the action of an external force.”

Gah! Well, neither did we. Mind you, we had some great talks about this and performed lots of experiments. And with the students helping I developed some really simple explanations:
“Simply
put, if an object is not moving it will never move and if an object is moving
it will continue to move in the same direction forever.”
Now, I think that is pretty easy to understand- we had help with some fabulous videos I found and you can find the links for them at the bottom of this post!
The experiment that sparked the beginning of this stuff about Newton was about marshmallow blow tubes.
Yep! 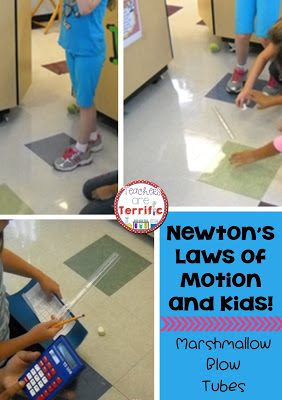 This is the reason we needed the science behind variables. The kids had to control how they blew the marshmallows, where in the tube the marshmallow was placed, and how long the tube was. And they had to understand why these factors were important. The end result of this experiment was to determine if Newton was right about forces acting on a moving object.
This spectacular activity also had us measuring, calculating distances, and averaging distances. It was quite intense and these were third graders!
Of course, I think the fact they were blowing marshmallows all over the room was one reason they loved it.
The thing is- they still remember this stuff and this was two years ago. That is why getting those science concepts in there is so important! The hands-on activities are what helps them remember.

Science Thing 3: Separating Ink
This is an activity that I have used many times and when I started getting ready for it in the STEM Lab I wanted to make sure we understood the science behind what the activity.


Before we started the experiment we talked about the word “Chromatography”. I had the kids make lists of all the words that have graph or graphy in them and then take a close look at the words. Could they determine what chromatography might be by noticing the similarities between the words? Well, they got part of it right. They guessed that it had something to do with graphics or pictures.
Here’s the scoop: The
word part  “chroma” comes from the Greek word for color
and “graphy” means writing. Chromatography is a process to
separate mixtures by using a liquid. In this experiment the liquid is water. We used a coffee filter paper as the solid to help with the separation. The mixture, which is marker ink, will separate. Here’s the science: some of the ink’s
components will stick to the solid and other parts will wick across the solid.
The result is a band of colors. The colors just happen to be the colors of the ink used to make each marker! Now, that’s pretty cool! 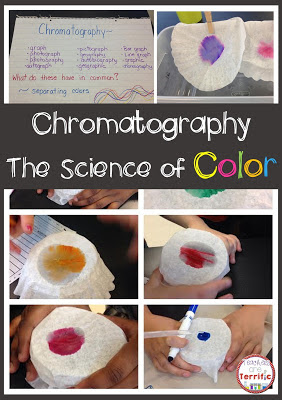 We went through the process with 6 colors of markers and then repeated it with black markers. Do you know what colors make up black ink?
The design part of this challenge came later when we used our filter papers for an art project!

Science Thing 4: Rampology
Okay, let’s go back to Newton and the scientific method.
This past May I invented an experiment with ramps for my third graders. They started off with plastic ramps and worked on what kind of angle the ramp needed in order to produce the best distance for the little cars. Then we tried adding weights to the cars to see if that changed anything.
I had to really work with them to make sure they understood to test one variable at a time. We went back to our poster display and word wall vocabulary numerous times! Then we moved on to Newton!
In looking at Newton’s Second Law of Motion we were a little muddled. What do yoo think?
“In
this law Newton says that the greater the mass of an object, the more force it
will take to accelerate that object. He even has a scientific formula for this:
Force = Mass x Acceleration or F= M x A. The Force (F) acting on an object
is equal to the object’s Mass (M) times its Acceleration (A).”


Yeah. You try reading that to some third graders and see what you get!
Well, actually it will work better than you think because after watching some videos and talking about it and then using the plastic track and some little cars we were able to phrase the Law of Motion in kid terms. See what you think about this:


“In simple terms,
the farther you want something to go, the harder you must throw it or kick it.”
The kids surmised that if they wanted the cars to go farther then they would need bigger and taller ramps. 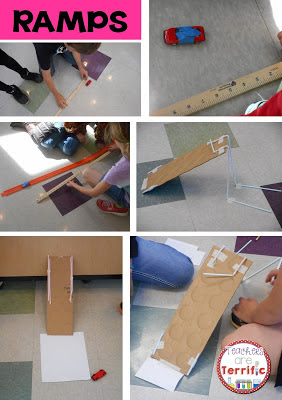 The design part of this challenge was to actually build a ramp! We had a lot of fun with the ramps and ran into some terrific problems to solve!
In the end we understood Newton’s Laws a little better and we had used the scientific method- especially managing the variables of the ramp and car trials!

So, here’s the point of today’s message. The science  behind why something works the way it does can be the background of a STEM event. Sometimes that is how I introduce a topic. But sometimes I tell the kids NOTHING. I let them make the discoveries and then later we learn about the science behind it!
I am willing to bet that these will be the concepts the kids remember for a long time! For you, as a regular classroom teacher, STEM is perfect! You can cover those science standards, add a design challenge to it, and cement the learning!

Okay here are your links for some great Newton Videos:
Video 1– This one shows a really neat look at objects floating in zero gravity and the information is easy to understand!
Video 2 -This is a neat presentation showing a cartoon format with
each law. It’s easy to understand the concepts, but the video sound is not
working correctly. Mute it!
Video 3– This is a short video, but really good!


Join me for Part 4 next week! We will talk about Problem Solving!!