Top
Looking for FREE Resources?
Click Here!
Thanks so much for stopping by. This is part 2 in my summer STEM series! My goal is to convince you to try STEM. I tried to think of the things that might be scary, but also the reasons STEM is so wonderful.
So, join me as we tackle one of my favorite reasons you should try STEM!
This week it’s all about Collaboration.

Last week we covered Supplies- which is the number one reason I hear teachers say they don’t want to try a STEM challenge! If you missed that post, click right{here}. Hopefully, that post convinced you that the supplies are really easy!

First off, STEM is group work. Every challenge (almost) I have ever tried had kids working in groups of 3-4 and sometimes as many as 8.
Let me just tell you this:
It is AMAZING to watch kids work together. To be honest it took time for us to reach a level of comfort with this concept. Now, after two years of weekly STEM lab class my kids know what to do and they get busy. Here are my favorite parts of Collaboration!
PLANNING
This has been a real learning curve. But I finally found a splendid way to get everyone involved.
Take a look: 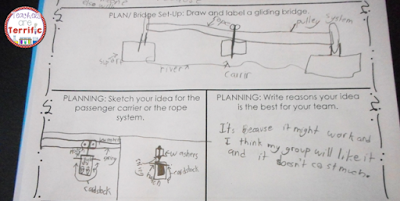 Every student has a lab sheet and on it every student must sketch the idea he or she has. The drawing must be labeled. Here’s the real gem of this process. After sketching the student must write reasons the idea is the best for the group. (In the photo above the student has written this reason his Cargo Drop idea is best: “It might work and I think my group will like it and it doesn’t cost much.”) Then, we stop and present ideas. Every team member must turn their paper around to the other kids, tell about their sketch, point out what is happening in the sketch, tell about the idea, and then talk about why it is the best for the group. The others may ask questions. Then the next student in the group does the same thing!
After all of them have presented ideas the group discusses what to do. They must decide as a group and complete a final sketch of that decision and write why they made the choices.
Oh my!
Can I just tell you that inventing this plan is one of my genius moments. It takes a little bit of time to do this, but it pays off in the end. There is no whining about not being heard. The plan gives everyone a voice. Best of all, the kids work through the ideas and come up with great combinations of ideas and then they are ready to get busy building. It is a true collaborative effort right from the beginning.
CHOOSING 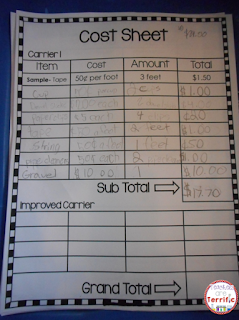 One of our favorite things to add to a STEM challenge is the use of a budget. For some reason kids love it when the supplies have a “cost”. I assign a dollar value to each supply and part of the task involves deciding which supplies and how much will be needed. I LOVE watching the kids make these decisions. Just recently I had a group that spent a good five minutes with detailed examination of the supplies and then quite a bit of worry over the price of foam pieces. But, y’all isn’t this real life?
In the meantime it makes the kids work together to make decisions. And I often send them back to the “drawing board”. When I have a group that asks for a large amount of anything- regardless of its cost- I ask them to revisit their design plan and make sure they need 15 cups or foam pieces or whatever. That is also such an interesting conversation to eavesdrop on!

WORKING TOGETHER
Speaking of working together!
STEM forces this! As I said, this is a learning experience. We have gone through quite a bit of talking to help all students understand their duties to a group and how to work even when you don’t like your group. (That’s real life, too!) The great thing is this: The more STEM you do, the better it will get!
Here’s a few of my favorite moments! 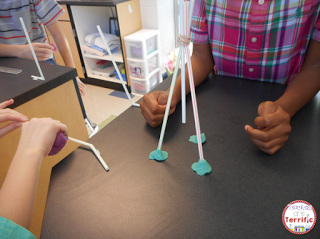 This one is a little activity in which two groups had to work together in a bridge/tower challenge. Each group received the same supplies. But one group had to build a bridge and the other had to build a tower that would sit on the bridge. WOW! This activity was electric! The energy in the room was just amazing. Each group had to do its own planning for the task, but here’s the kicker. The two partner groups had to work together! The bridge had to support the tower and the tower people had to make sure the tower would sit correctly on the bridge. It was the ultimate test of teamwork! 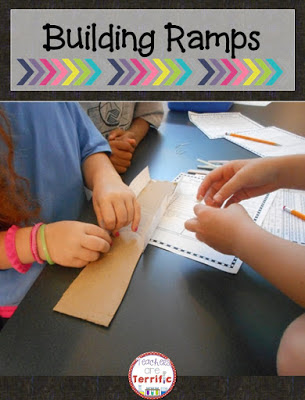 This is a recent activity about building ramps. I LOVE this photo. The kids have their design sketches in front of them, each student is doing something to help. Can you tell one student is sitting on the tabletop with pieces of tape torn and ready to hand off? Sometimes I will stop at a group and ask how things are going and they will begin to rattle off what their jobs are: Tape handler, sketch master, paper folder, cutter, tester……nevermind that I have given them official job titles that are fancy. They love tape handler better! 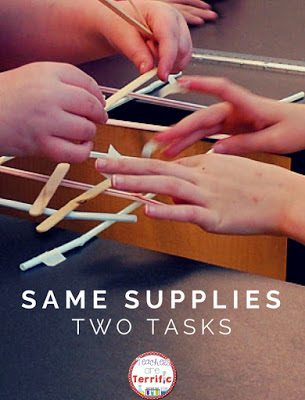 This is another photo from the bridge and tower experience. I love this one just because it is so obvious that it is taking multiple hands to get the job done! 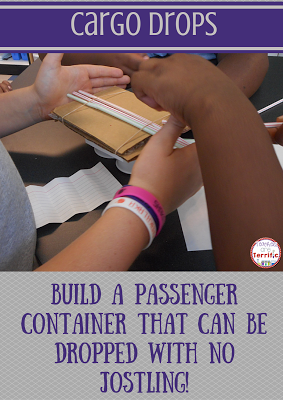 Same thing with this one. They are building a container for a cargo drop and it is taking lots of hands to get it done! 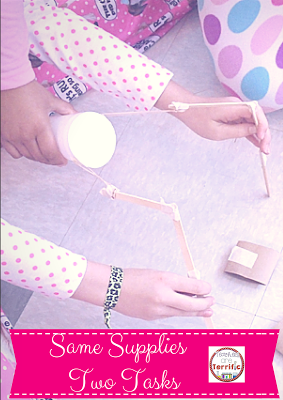 This was a little fun challenge about targets and launchers with two groups having to work together. One group built the launching apparatus and the other built a target to shoot at. The two groups had to work together, but in the photo you can see that even in shooting their device it took lots of hands!
You want team work at its grandest? – try STEM! 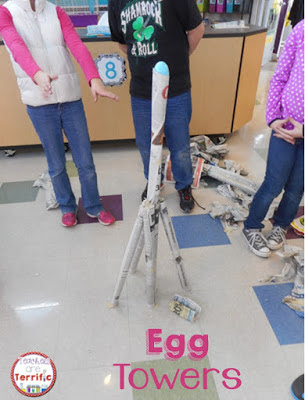 One of our favorite parts of STEM that is all about collaboration is presenting our final structures. At the end of class we take a few minutes to share what has been created. The kids talk about the problems they had, how those problems were solved, and then demonstrate their results. The team in the above photo built a tower from newspaper that supports an egg. The girl with pink sleeves is explaining why the structure is standing!
This presentation time is vital to your STEM challenges. It gives every group a moment to shine- even if their structure is a failure. I have had so many groups say, “Well, our tower is not standing, but we were still successful because….” and then proceed to tell us all the good things they did together. We all listen, ask questions, and applaud the efforts of each group! 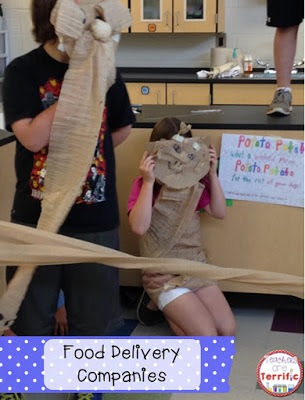 Okay, let me just tell you about the photo above!
This is in the middle of a presentation for a challenge in which each group had to design a box for a food delivery company. The box had to keep the food hot and had to be crush proof. The food delivery company had to have advertising- which included posters and a television commercial. For this major project I put fifth graders into groups of 8-9 kids! Yep, 8-9! But here’s the reason: a small group worked on the delivery box. They had to build it and test it. Another group was the poster team. Another small group was the TV commercial team.
All three teams had to work together. The box design team had to relay messages to the ad teams about what the box looked like. The poster team had to work with the TV team to get the slogan just right. All team members were in the TV commercial and had to rehearse together.
WOW!
Now, back to the photo.
One team asked if they could make costumes. I said they could as long as it was simple supplies. They used cardboard and packing fluffy stuff and made masks. In the photo you can see a lion (on the floor) and an elephant (standing). In the poster you see the words Potato Potato—now sing that to the tune of Hakuna Matata…..
It was the best kid commercial ever! They had an entire song written using the Hakuna Matata tune and it was all about their baked potato food company. All team members were disguised as a jungle animal. They had props, dancing, singing, and it was just so fun!

Kids will amaze you with their creativity, their thinking, and the way they can work together.
Have I convinced you to try a STEM challenge yet?

Next week in this summer STEM series: The Science!
Oh my!

In the meantime try these: