Top
Looking for FREE Resources?
Click Here!
Happy Friday everyone!
Five more school days for me!
How about you?

So what am I up to with today’s post? 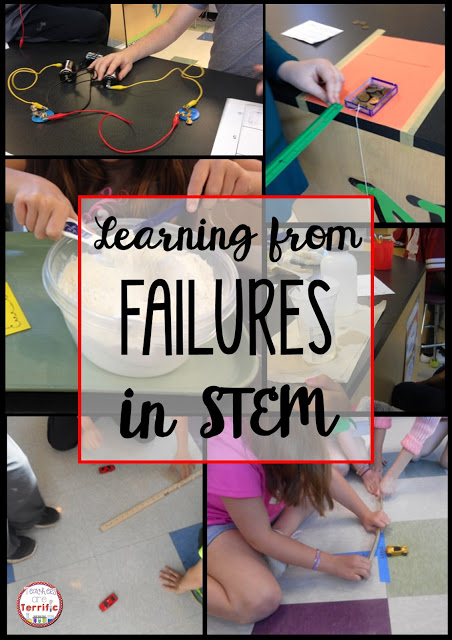 The month of May has been quite a circus at my school- as I am sure has been the case with you guys, too!
So, let’s make this post a celebration of all the ways my classroom has turned into a zoo….or circus…

Linking with Doodlebugs again for a fabulous Friday discussion.
If you read my blog, and I hope you do, then you know that I only teach STEM/Science and I frequently use this space to talk about the great things we accomplish in our lab.
Lest you think I am a superwoman and all things are always terrific, let’s take a look at some not-so-great moments, my failure moments! Call it a circus… or a zoo…. or a normal classroom! 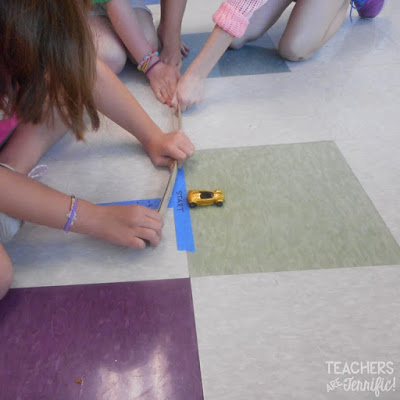 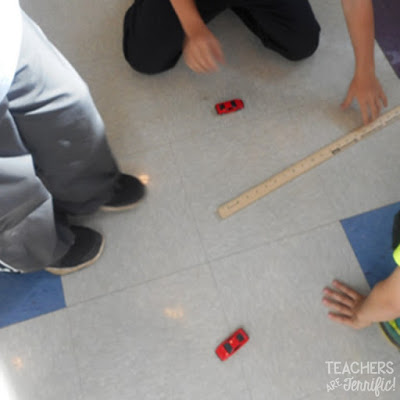 Okay, well the idea here was to have the kids test Newton’s Laws of Motion- one of which says (paraphrasing here) that the more force applied the more distance an object will travel.
So, how to apply a force to a little red car?  Hmmm, just having the kids push lightly, medium, and hard seemed out of the question as I could just imagine them throwing cars across the room.
So, the car whackers were born.
It only took me about a minute and a half to know this was a bad idea. The kids were supposed to pull back the rather flimsy yard stick to a certain distance and let go. The stick should  fly forward and strike the car. The more you pull it back the farther the car should go. Right?
Nope!
Too many uncontrollable variables. It depends on the person pulling back and how the stick slides on the floor and so many other things. We tried it for two classes and then I ditched this idea.
Besides by then I had two broken sticks and at least three kids that got popped in the head by a swinging stick.
Apparently they also make great twirling batons.
The take-away: we had great discussions about variables- which makes me think the kids understand that concept! 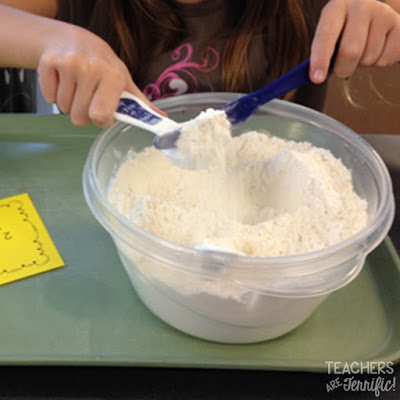 Okay, well who doesn’t love cooking with kids?
Hmmmmm…..loaded question, right?
My idea was to have kids test different ingredients in pancake batter and determine the right amount of some ingredients to make the best pancake. It is a FABULOUS STEM challenge.
And I mean that.
So, why is it a failure?
MEASURING, that’s why. Now, mind you, I am not saying nobody cooks anymore, but really nobody cooks. I mean we open boxes and frozen things and throw dinner together. I am guilty of that, too. So, it is no wonder that kids can’t use measuring cups and spoon up some flour. Lots of adults can’t do that either! So, first I had to show them how to level flour on a measuring spoon and in a measuring cup! And, you know what? They actually did quite well with it! It just took five hundred years! So, I gave up on having the kids do the measuring and did it myself. I used about ten thousand little cups and all they had to do was pour in a cup! The experiment was truly amazing and we also got to eat pancakes!
The take-away: they definitely know that a chemical reaction is happening with pancake batter and they know it needs to be perfect if you want the pancake to taste good! 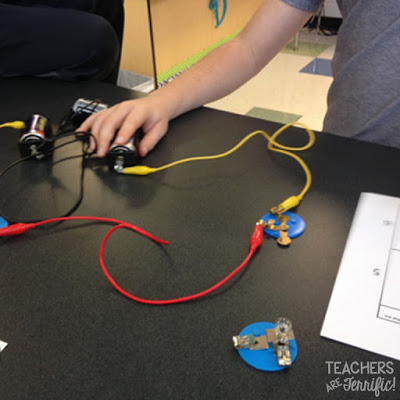 Doesn’t that look interesting?
Let me explain.
My state has this wonderful science and math program that includes four hands-on science kits for each grade level for each school year. The kits arrive in 1-2 big boxes with everything you need. It’s really cool! So, a couple of years ago my school system purchased engineering kits for each grade level to extend one of those kits. For fourth grade the engineering kit is about electric circuits.
The teachers at my school gave me all their circuit kits.
Heaven, right?
NOPE.
I spent hours, hours, making lab sheets for circuits to have them build. I bought circuit clipart so the sheets would look great. I was really pleased.
When I handed these out in the lab, it took the kids about 4 minutes to be finished. They already knew so much about circuits that these follow up lessons were not needed. They were hooking up parallel and series circuits like nobody’s business.
And there were 45 minutes of class left.
So, I told them to just explore.
945 batteries later we wrote about what we had learned that day.
1. If you hook 5 batteries to one bulb the bulb will explode. (I blogged about this a long time ago.)
2. Batteries don’t last long when you open and close the switches a lot! (That’s why we needed 945 batteries. And I’m talking about D cell batteries, the ones that cost 8 million dollars.)
3. Buzzers are super easy to hook up and they are also very, like extremely annoying. (This was one of the tasks- hook up a buzzer that will alarm when you open a box.)
4. Exploring with circuits is so much more fun than doing lab sheets.
Oh well. 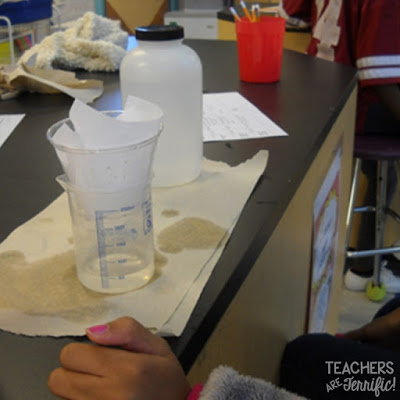 So, this challenge was from an engineering kit that was given to me from an engineering company (and I will not tell you which one because they will not like all the stuff I am about to say.)
Basically, the kids experimented with about ten different materials to discover which would allow the best water flow to come through the material in a specific amount of time. The materials were things like netting, waxed paper, foil, and cheesecloth.The story from the engineering kit was about frog skin, but I didn’t use that story because I thought it was silly and I really didn’t think my kids would buy into it. So, I made up my own story. My story was about designing a filter system rather than a membrane.
Anyway, testing the materials was interesting, but it used 80 gallons of water which was spilled rather regularly. After I swiped the second giant roll of paper towels from the custodian closet I was pretty much done with this one.
In the end we knew to never make a filter out of aluminum foil or netting.
Pretty sure I would just use a coffee filter….just sayin’ 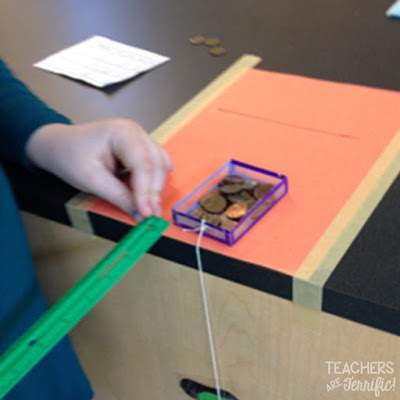 Who doesn’t love a good friction experiment?
I mean this looks pretty basic, right?
So, I spent, like 17 hours cutting those cute little boxes and reinforcing them so they would not fall apart. Then I made the zip lock bag things by attaching string to them and to get the string in the boxes I had to use a giant needle so that took another 16 hours. We were ready to prove that friction creates an imbalance in forces and will slow down an object. Once we proved this we would make roller coasters!
Yeah, right.
So, here’s what really happened.
First, we spilled pennies about every seven minutes.
Then, we had extraordinary amounts of pennies filling up the box, but the table next to us had movement after three pennies so why were we getting such different results?
Then, we had about 14 strings that got in knots because the box would slide off the table.
Then we had some kids measuring in centimeters and some in inches so that skewed our data.
Finally I had enough of this insanity and I said, “HOLD IT! STOP EVERYTHING! I will be right back!”
I went to my storage closet and got out the giant box of foam tubes, which luckily were already cut and ready to go. I threw those down and said, “Friction slows things down, build some roller coasters!” Then I made myself a cup of coffee and watched the kids have a blast. 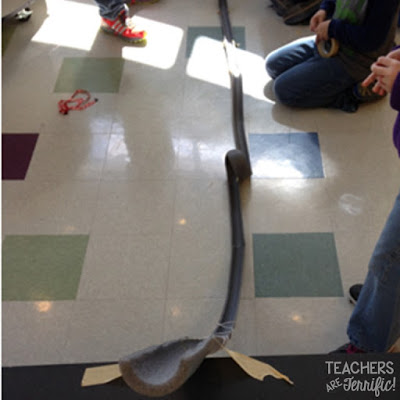 So, there you have it,
I have tons of failures in my STEM Lab.
But it is so fun. I love it when things don’t work because it gives us a chance to discover why and talk about the science behind it. That’s real learning, people! That is why failure is so important!
Just so you will know, this post had a little hyperbole thrown in.
Have a great weekend!
Not everything we do fails! Sometimes we are great problem solvers:

Paired text about noisy insects- one of them is th