Top
Looking for FREE Resources?
Click Here!
So, what is going on in the Lab!
Let’s get caught up with all some of the things I have tried since school began!
FIRST, let me just say that I view teaching everyday as one big giant experiment. Sometimes things work and sometimes they don’t. You cannot plan this stuff, people.
Well, I mean you can plan for class, but you absolutely cannot predict how it will go.
You know exactly what I mean.

No matter how much you plan something and try to think of everything possible to make your days go well, there is still that moment when a little child says (with some anxiety in her voice), “Mrs. Davis, I have to go to the bathroom right now”….and you realize the child is already peeing right on your feet. (That happened to me….)
So, despite all my thinking that this new year would go splendidly, I must confess, I have made some boo-boos! Let’s review them, shall we!??
And why not make this a list of FIVE and
make it Five for Friday!
Clever, right?

Thanks Kacey for my weekly excuse to make a list of five things….

Remember when I wrote about my Behavior Management Plan for this year? 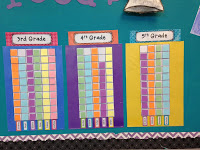 There’s the little graphs I created for each of my 15 classes. The plan was to start everyone off with ten tabs on the class graph and remove a tab whenever someone created some drama. At the end of the week the class with the most remaining would be the Class of the Week.
BIG Failure- epic.
The tabs would not stay on. I am inconsistent with having kids remove them as I am too busy for the small stuff….
so I gave that up.
I have misbehaving kids sign a log and that student has a consequence depending on the infraction. Too many log signings and I make a phone call to mom. I am still choosing a Class of the Week and the kids like that. I put the class names on the lab door and they do notice! The teachers notice, too!

Don’t cook pancakes for NINE classes.
I had this enormous Brain Pop.
I invented this amazing STEM Activity that involved experimenting with cooking pancakes. 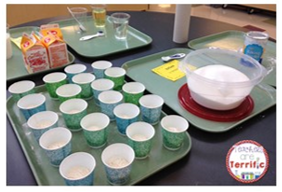 I decided to make it a Fourth grade activity and then realized my fifth graders would miss out on this fabulousness.
So, I decided to let them also do the activity.
That meant NINE classes all mixing and stirring and cooking and eating and making a huge mess at the same time and it took three weeks to complete……. 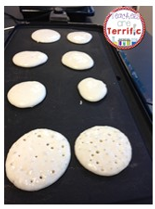 Mind you, it was a super, best thing ever, kind of activity, but much too busy for that many classes at the same time!
I will repeat it next year for just one grade level!

Third Thing I Learned
Third Graders might not always think outside the box.
And when they do- it’s a doozy.
Our STEM Challenge this week: Design a robot model and the robot must have a function, a purpose, a reason for being.
That robot in the photo is Galaxy Man.

His function? Glad you asked. All those shiny doodads and extensions are forms of weapons. His job is to save the Galaxy.
And I thought they would invent homework robots and lunch making robots- nope, we are saving the GALAXY.

Fourth Thing I Learned
Kids do not know how to measure. I gave them measuring cups and showed them how to level off the cup with the edge of a knife. Here’s what they did…. 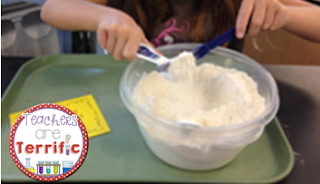 They did pretty well at this, but still spilled a ton of flour and baking powder!
Anyway, I spent about two weeks after that working on different forms of measurement. By far, the favorite activity was using a balance scale: 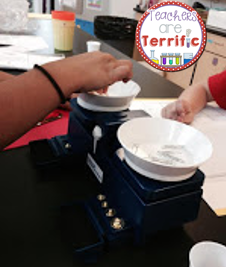 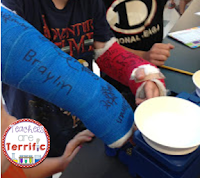 And, yes, that is a child with two broken arms. His team encouraged him to try the scale even though his casts went above the elbow and he could not bend his arms!

Platforms are fun. We have built two different versions of platforms so far and had a really fun time.
Mostly we have had to make sure we are building a platform and not Rapunzel’s tower. 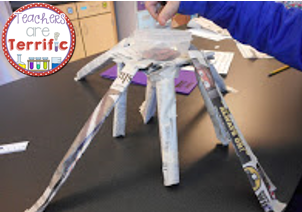 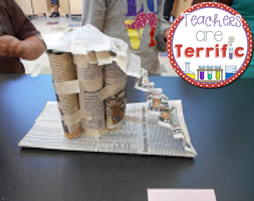 And, finally, building something using just basic and inexpensive supplies is the best thing of all…. 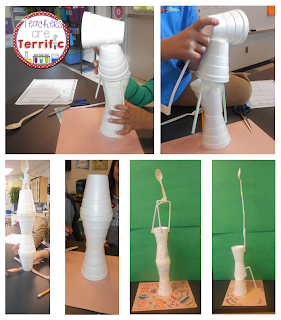 It’s been a great start for this year.
Everyday is an experiment.
But I do have a science lab as my classroom!

How is your year going?

It's here! The annual 4th of July Dollar Deals✨I