Happy Weekend Friends!  I just uploaded some pictures from my camera and had some very excellent shots of a design challenge we did in the lab this week….soooo I decided to bust out a post about two things…..

Here’s the truth FIRST….
I recently had to miss two days of school for workshops. I left a fabulous horrible experiment with my sub that involved GUMMY BEARS!

I thought it was GREAT! My sub told me she had fun. The kids I talked to seemed to like it. I even wrote about it on this blog and proclaimed it wonderful enough to create a TpT packet for it.

THEN I tried it with students myself.

Are you kidding me? It was a HUGE amount of preparation, the room smelled truly awful- sweetness and vinegar, yuck!- and worst of all it did practically NOTHING scientifically. It all sounded good on paper but did not prove to be.

Seriously, we used the scientific method and that is about it. We used forceps so that was a little bit sciencey…but in the end, it was not WORTH the prep it took to make all those little cups of salt water, and vinegar, and baking soda water, and soak the bears overnight. After doing it with TWO classes I had a serious rethink and went to my files for a quick one session idea for the rest of the week: 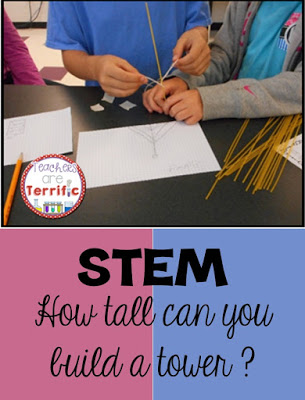 Here’s how it works:
Kids get a bag with 20 spaghetti sticks and a few other supplies. They are challenged to build the largest tower possible with those supplies with one item that must be on the top!

OK, I knew this was going to be fun, but ya’ll it is one of THE best things we have done all year. I paid $12 to buy all those blasted Gummy Bears and a box of spaghetti and Wal- Mart brand jumbo marshmallows worked better! Really! 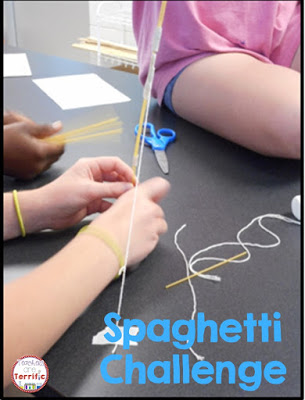 Lots of groups did this- one tiny strand of spaghetti to make a really tall tower- but it doesn’t support the marshmallow! 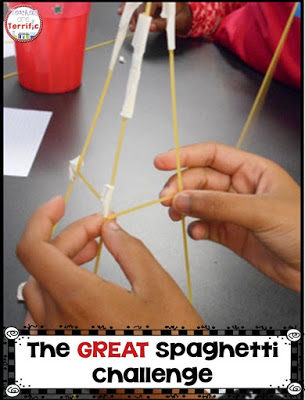 This group worked on adding a cross beam! 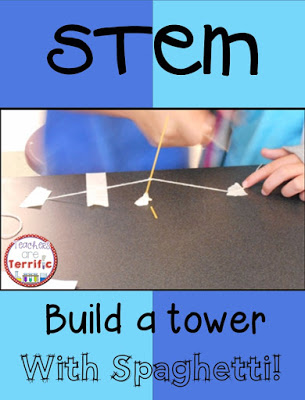 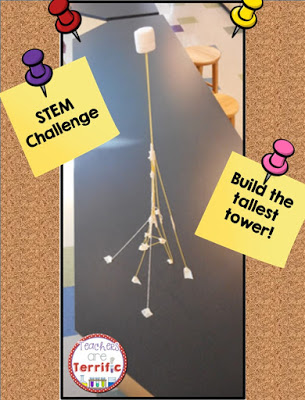 It was quite a competition to see who could build the tallest one!

I cannot say this enough! STEM is the greatest KID HEAVEN EVER! After we finished with these structures we had the best talk. Why were we successful? Why not? One group said these words, “Well, we built a great tower but then we realized the mass of the marshmallow needed a much sturdier foundation.” What????? Did you hear all that science and design in there?

So, then, I said, “What if you came in tomorrow and had all these supplies again. What would you do?” Oh my, goodness. Well, the room buzzed as they began to plan how they would change the designs based on their epic failures. (We love to use the term epic failure!) Then I added this, “What if you could double one of the supplies and rebuild? What supply would you double?” This is when they started begging to repeat this activity.

AWESOME STUFF people……. and it was a box of spaghetti and a bag of marshmallows. Learning=PRICELESS!