Top
Looking for Winter Resources?
Click Here!
So, I started a new STEM adventure and I really had no idea how my students might react. After each class completed this little task I asked for some feedback – which is kind of a dangerous thing to do with fifth graders. Nevertheless, I asked and here is what I got,

“After three years of STEM this is the favorite thing I have ever done. I loved every part of this. I loved solving the puzzles and finding things. It made me use by brain.”

Seriously.
I think I have a winner with this new idea. 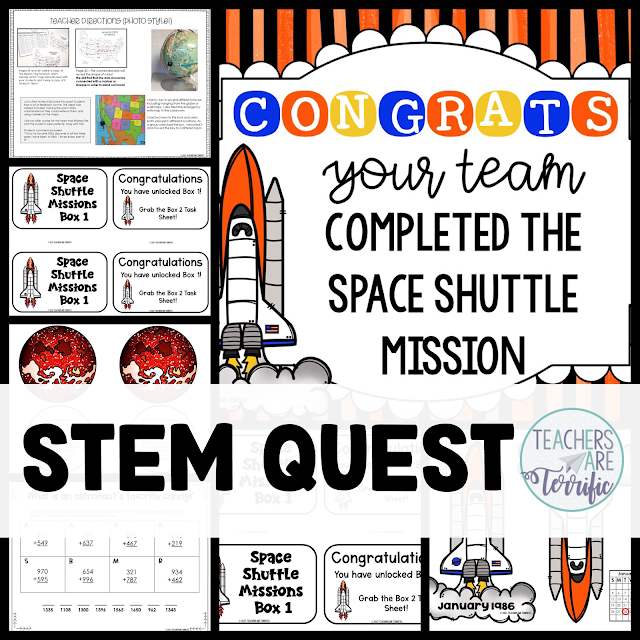 These adventures are called many things: Lock Out, Escape Room, Break Out, and more.

My Escape Rooms are puzzles, riddles, tasks, and solving problems to open locked boxes. The kids work together to solve all the tasks and open the locks to “escape”. We call these Escape Quests!

So, what do you need to get started?

Well, you need some boxes and some locks. I found locks at a hardware store, but stores like Wal Mart have them, too. I even found some locks with keys at Dollar Tree.
For the boxes, I found plastic tool boxes at Dollar Tree. I also experimented with a hole punch and my locks and discovered you can use a packing box (like from Amazon), punch holes in the flaps, and your lock will thread through and it works!
I tried to think of everything because I want you to try this without having to spend a lot of money. More about this later. 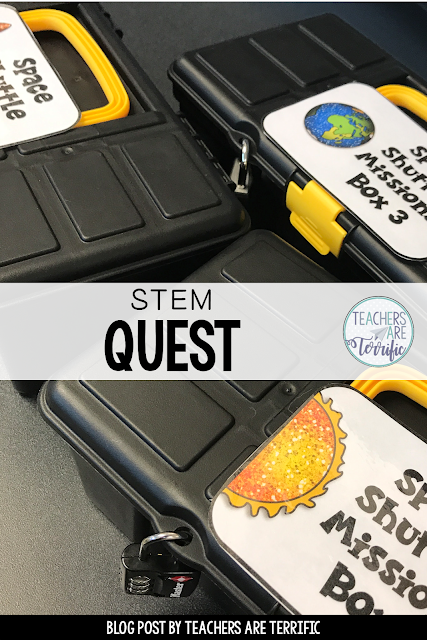 Above you can see my first Quest boxes. They are labeled and ready to go.

How does this work?

The students had three tasks. The first was to take a look at a data table about space shuttle missions. They had some specific items from the data table to find and place in chronological order. 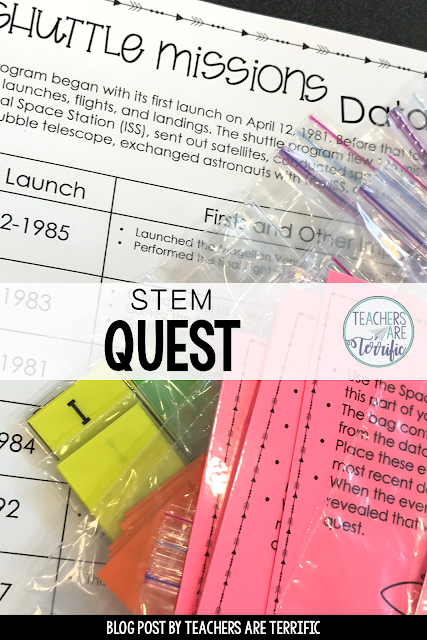 The photo above shows the data table and strips they sorted. If they sorted those correctly a word would be spelled- which just happened to be someone’s name. Check them out below sorting the strips. This required some diligence in finding the right dates and events. 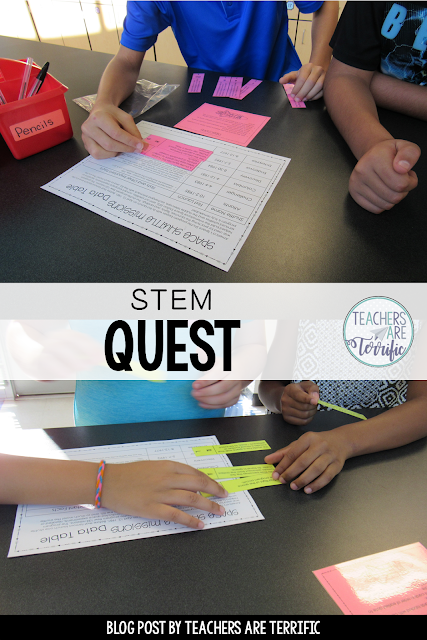 The name on the correctly ordered events was the first teacher in space. Take a look at the drawing below. 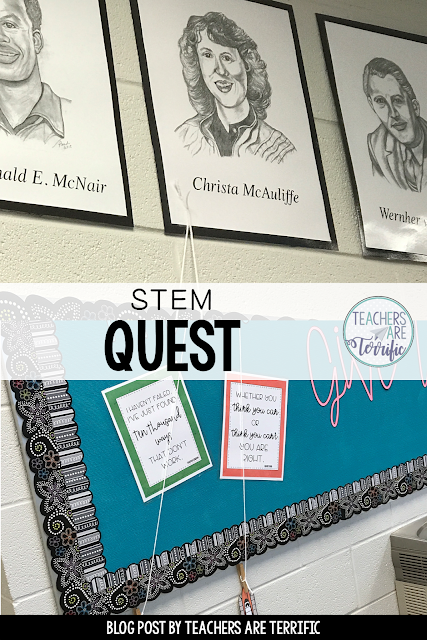 We have a volunteer grandmother that works at our school and she drew those scientists in pencil and donated the drawings to our lab. Aren’t they amazing? Anyway, attached to Christa’s drawing were lines that led to space shuttle images and if they kids pursued this they found a clue on the back of the space shuttle that helped them determine the combination of the first lock.

Here’s why I always test everything before I write about it or add it to TpT!

My original thinking was that students would retrieve their next task papers out of trays on my desk. So, when they opened Box 1 a card inside it told them to get the next paper from my desk. Silly kids! They were picking up everything on my desk and searching – when it was right in those brightly colored baskets. 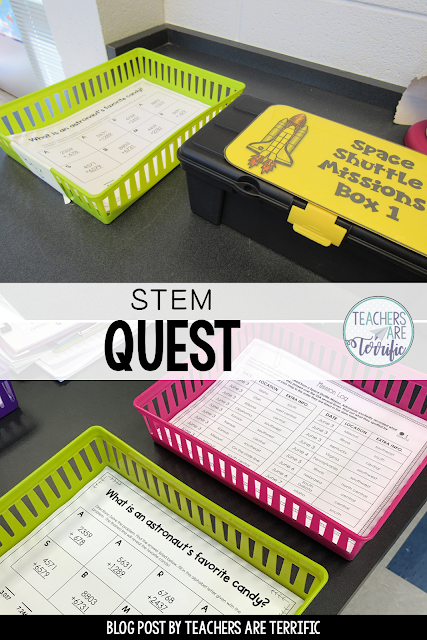 I remedied that by placing the tasks right beside the locked boxes!
The second task involved a math paper and a riddle. The answer to the riddle led them to a planets display and the clue to open the box. 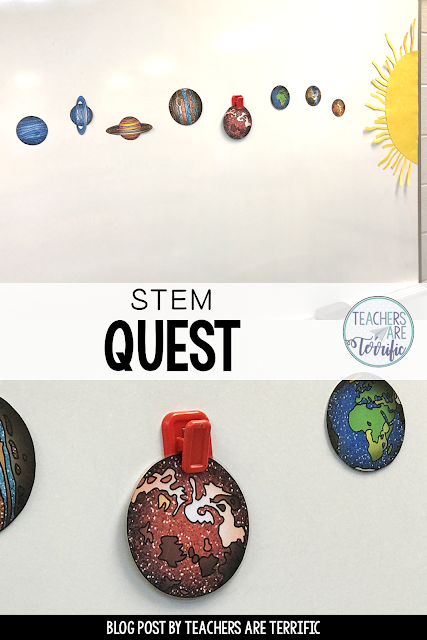 How does this end?

The last task was to complete a map showing things the astronauts might have seen from space. If this was completed correctly the paper revealed a KEY. I hid the key on maps around the room– get it- it was a MAP KEY! Nothing like a great pun! 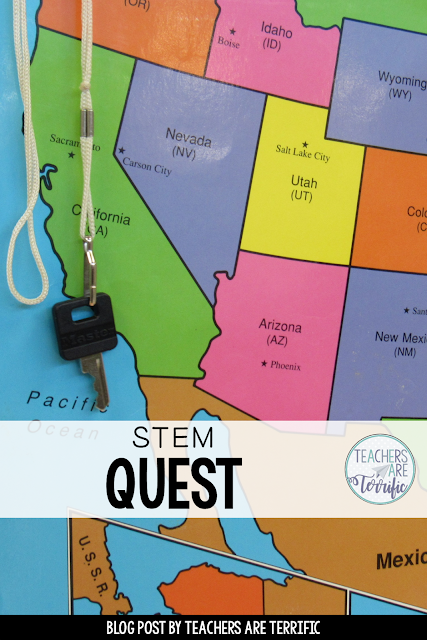 When they opened the last box they received a certificate. I did think about it later and thought I should have purchased some Moon Pies to award them as they finished.
Overall, the kids LOVED THIS! I invented a second version of this that uses landforms as the basis of the Quest. I included a peek at it below. Both sets are available in my store right now! 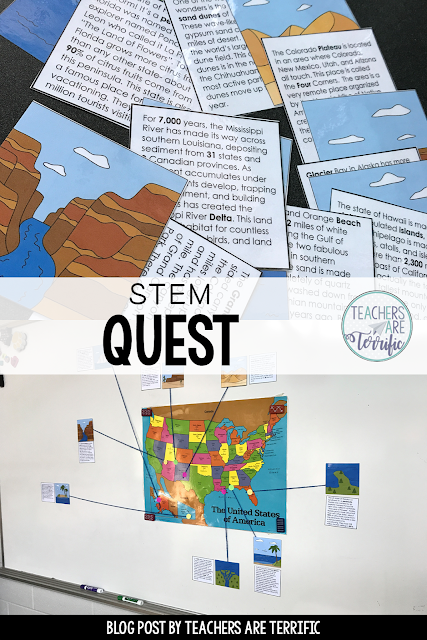 Based on the feedback I have gotten from kids about our Quests you should try this! The two we have tackled thus far are below! 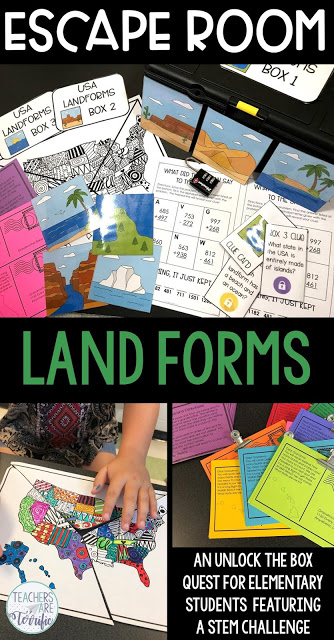 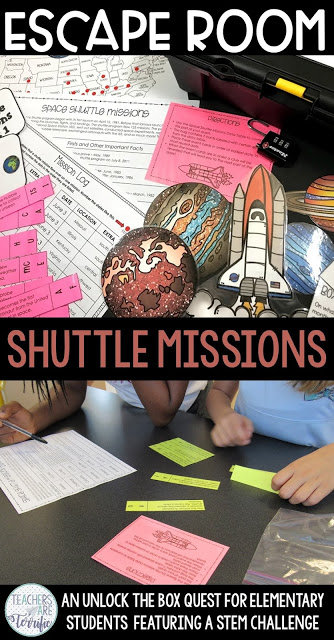